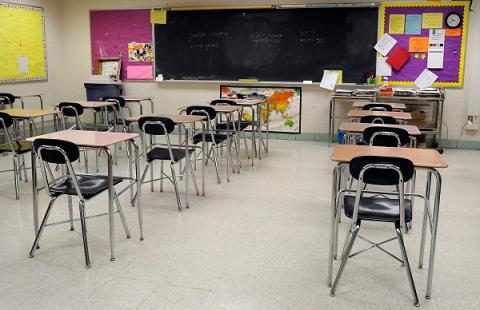 The government is considering legislation to allow employers the right to not allow employees who were not vaccinated to enter the workplace, as well as oblige teachers to get inoculated, Health Ministry Yuli Edelstein said Wednesday, a day before children in pre-schools and lower grades were set to return to classrooms.

The idea has been part of a wider discussion to formulate a policy to reward those who received the vaccine and penalize those who are not willing to, by granting the former access to leisure and cultural activities under the so called “green label.”

Justice Minister Benny Gantz asked Attorney General Avichai Mandelblit to prepare a position paper addressing the legal issues of implementing the green label ahead of a cabinet meeting on the topic that was expected to take place on Thursday but might be postponed to Sunday.

“It is quite clear that there are vital areas where people cannot be prevented from entering regardless of the vaccine. But there are quite a few things that will open soon,” Edelstein pointed out. “We are not going to cause the labs to collapse because of those who did not find the time to get vaccinated and will want to be tested instead.

”For this reason, he explained that the green label will not be granted to those who just test negative. “This is why I highly recommend people who want to enjoy hotels, culture, gyms – to go and get vaccinated to access these places freely,” he stressed. The minister also pointed out that the upcoming festivities for Purim which falls at the end of February, will need to be held in a restricted way.

“In order for Purim not to become the Tisha B'Av of contagions, this year the joy should be very limited,” he said referring to the day when Jews mourned the destruction of the Jerusalem Temple. “No gatherings, no dancing, no parties. ”During an interview on channel 12, Health Ministry’s Director General Chezy Levi said that the authorities are considering imposing new restrictions for the holiday, such as requiring Israelis to celebrate with their nuclear families.

As the authorities weighed the next steps in lifting the coronavirus restrictions, the rate of daily COVID-19 tests returning with a positive result dropped below 8% for the first time in weeks. Some 7.7% of the 81,352 swabs administered on Tuesday returned a positive result – the lowest in weeks, excluding data from Saturdays and Sundays, when fewer tests are being conducted. The percentage peaked at 10.2% on January 18 and had consistently remained around 9% or higher since then.

The number of seriously ill patients also decreased to its lowest figure in a month. Some 1,020 patients were in serious condition on Wednesday, according to a Health Ministry update, marking the fourth day of decline in a row. Earlier in the morning, Deputy Health Minister Yoav Kisch told KAN radio station that the number had fallen below 1,000 for a time, but was up again by the time the ministry disseminated the latest data.

The information is considered crucial by health authorities in the strategy to reopen the country, in light of the high pressure the hospital system is facing. Also, new daily cases showed a significant decrease, with some 6,075 people infected with the virus on Tuesday. In addition, the R rate, or reproduction rate, which measures the ability of the disease to spread, stood at 9.3 after several days bordering 1.

However, 317 individuals were still on ventilators, and the death toll stood at 5,233. Some 130,000 were vaccinated on Tuesday, bringing the total numbers of Israelis who have received at least the first dose of the vaccine to some 3.6 million. About 2.3 million have already gotten both injections. Also on Wednesday, chaos arose regarding the outline approved by the coronavirus cabinet to reopen the education system.

According to the plan, starting from Thursday, preschoolers, kindergarten children and pupils in grades 1-4 in yellow and green areas will return to school. Children in “light orange” areas, according to the Health Ministry’s “traffic light” rating, that have at least 70% of their community vaccinated, will also go back to school. The Health Ministry ranks the color of each city weekly, and will begin determining the vaccination rate of each authority on a weekly basis as well.

In large cities, such as Tel Aviv and Jerusalem, the Health Ministry initially said that students in certain neighborhoods that meet the same criteria would be allowed to return to their studies. However, the decision appeared to be canceled on Wednesday night. The mayor of Jerusalem Moshe Lion said that no school in the city will reopen before the ministry gives clear instructions.

The outline permits groups of 10 students to meet for social or learning activities through their schools in open areas also in orange and red cities. Students in grades 5-6 and 11-12 in these areas will return to school on February 23, and students in grades 7-10 on March 9, if the rate of infection continues to slowly decline and more people are vaccinated.