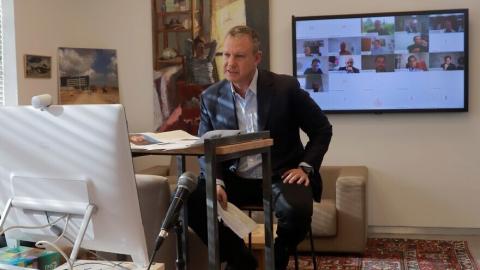 Amid a raging pandemic the likes of which most, if not all, have never experienced, business, political and health care leaders convened a virtual conference to discuss ways to harness technology to help combat the coronavirus.

The session, titled “The Corona Wakeup Call: Innovation and Startups,” was organized and moderated by Erel Margalit, founder and head of the Israel-based investment firm Jerusalem Venture Partners. “The more we are coordinating, the more collaboration there is and the more governmental policies complement each other, the better our chance over the next weeks of perhaps containing the virus,” Margalit said when opening the event.

“Those holding public office and those running start-ups are working to make a big difference everywhere,” he asserted.Among the speakers was Davide Falascon, chief innovation officer of Italy, where about 69,000 confirmed cases of coronavirus have caused over 6,000 deaths. He noted that the ongoing national crisis had not prevented Rome from “activating measures to improve living conditions.

”For example, the Ministry of Innovation, in conjunction with other public institutions, has introduced a new program called Solidarietà Digitale. “The initiative leverages the willingness of companies to offer digital services for free to those restricted at home,” Falascon said. “This allows people to improve their connectivity and better pass the time. We know after two weeks [of quarantine] that they are suffering.

”Meanwhile, concern is growing in the United States, where authorities have reported 53,000 cases of coronavirus and over 680 deaths. Some 5% of the diagnoses were made in New York City, which is taking steps to reinforce its health care system.“Our priorities right now are identifying additional hospitals and medical space due to the surge of [coronavirus] patients, as well as finding new sources of supplies and industry staff,” Lindsay Clinton, executive vice president of industry and innovation at the New York City Economic Development Corporation, explained to the online audience.

She highlighted that her organization had made a conscientious decision to invest in setting up local chains of production for emergency items whose members are now being called to action.“We have had programming in hardware manufacturing for a number of years and this has created a really vibrant community,” Clinton said. “So, when we reached out only 48 hours ago and asked, ‘we need face shields, what can you do,’ in less than a day we had prototypes.

By the end of the week, we will have about 10,000 units and by next Tuesday there will be 120,000 [masks].”The conference – the first in a series of business-related webinars on tackling coronavirus – comes as the number of worldwide cases approached 420,000, of which over 18,000 resulted in death. By contrast, more than 108,000 people have recovered from COVID-19, the respiratory disease caused by the pathogen.

In the Middle East, some 33,000 cases of the virus have been reported, prompting many countries to impose complete lockdowns. “The governments here are really doing their best to stop the spread of the illness,” said Dubai-based Kamal Ghribi, chairman of GK Investments, which owns and operates medical facilities across the region. “I visited hospitals yesterday and there were only 26 people with COVID-19 in intensive care, which is a [relatively] low figure.

“We have learned from other nations such as China and Italy what steps need to be taken to lessen the severity of the outbreak,” Ghibri continued. “You cannot walk on the streets anymore in the [United Arab Emirates]. Everything is closed, there is nowhere to go. ”Iran, the hardest-hit Mideast nation, has more than 24,000 citizens infected with COVID-19 – including dozens of high-ranking officials – with authorities reporting over 1,900 deaths.

In Israel, the Health Ministry on Tuesday raised the number of diagnoses to 1,930, a jump of about 500 in the latest 24-hour period.Another theme of the virtual conference was the need for established companies to adapt to near-unprecedented circumstances.One example is AstraZeneca, the largest multi-national pharmaceutical company operating in China. It played a role in helping Beijing confront the coronavirus, which originated in the city of Wuhan in Hubei Province.

“Our response there was multitiered and initially focused on the vital task of maintaining supplies [of medications],” Ohad Goldberg, general manager of AstraZeneca Israel, said. “This required separating employees’ shifts and implementing enhanced sterilization techniques. “Then, there was a massive contribution – not only monetary but also in terms of products – to the local Chinese government, and we were working hand-in-hand with officials,” Goldberg added.

“That we were able to maintain business-as-usual, even while providing additional critical services and engaging with [Chinese] physicians – it was a seamless transition.”In this respect, he emphasized that the pandemic has induced many corporations to fundamentally rethink the way they function. “What we have seen is a drastic need to move all our interactions, both with doctors and patients, to digital mediums,” Goldberg elaborated.

“Things that we had planned for 2023 or 2025 have been implemented. In one week, we have become a virtual organization.”Indeed, participants in Tuesday’s discussion were optimistic that human ingenuity would, in this instance, eventually outduel Mother Nature.“We were collecting data on the coronavirus when, on February 1, we received a directive from Prime Minister Binyamin Netanyahu to shift all our resources to this issue,” said Dr. Eran Zehavy, who is spearheading the program against the coronavirus at the cutting-edge, state-sponsored Israel Institute for Biological Research.

“Our major goals are to develop a vaccine and neutralizing antibodies [to be used] as treatment. … The challenges are enormous and we are working with other companies, including start-ups that we trust.“The vaccine,” Zehavy concluded, “has been in development for almost three months … and we have already seen some very good and encouraging results.”