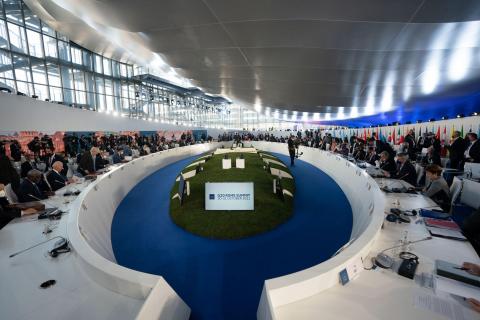 The Group of 20 (G20) leading industrialized nations began a two-day summit in Rome on Saturday with climate action and the COVID-19 pandemic set to dominate the talks. The G20 bloc, which includes Brazil, China, India, Germany and the United States, accounts for more than 80% of the world's gross domestic product, 60% of its population and an estimated 80% of carbon emissions.

Italian Prime Minister Mario Draghi welcomed the leaders to Rome's Nuvola cloud-like convention center in the Fascist-era EUR neighborhood, which was sealed off from the rest of the capital. "From the pandemic to climate change, to fair and equitable taxation, going it alone is simply not an option," Draghi told his counterparts.

He issued a fresh call for redoubled efforts to get COVID-19 vaccines to the world's least-prosperous countries. Draghi underlined that while 70% of people in rich countries have been vaccinated, only 3% in the poorest countries have had their shots, calling it "morally unacceptable."

German caretaker Chancellor Angela Merkel is in attendance along with US President Joe Biden and British Prime Minister Boris Johnson, among others. Some other leaders such as Russia's Vladimir Putin and China's Xi Jinping are taking part via video link.

Merkel invited Olaf Scholz, Germany's finance minister and her likely successor as chancellor, to join her at the summit. "It is very unusual for the incumbent chancellor and her likely successor to attend a summit together," said DW correspondent at the G20 meeting, Alexandra von Nahmen, adding that "the perception will be that this is just a sign of continuity in German politics."

Looming over the talks is pressure to make headway on tackling global warming, ahead of the key COP26 climate summit in Glasgow next week. G20 Leaders are set to say they aim to cap global warming at the 1.5 degrees Celsius level scientists say is vital to avoid disaster, but will largely avoid firm commitments, according to a draft statement seen by Reuters news agency.

China, the world's biggest polluter and responsible for more than a quarter of all carbon emissions, has been accused of sidestepping calls to stop building new coal-fired power plants. Beijing plans to reach carbon neutrality by 2060, falling short of the expectations of environmental groups.

Brazilian President Jair Bolsonaro has demanded that his country be paid for protecting its share of the world's biggest rainforest, the Amazon.

What else is on the G20 agenda?

As well as the pandemic and its consequences, the ministers are expected to discuss efforts to speed up the global economic recovery following the COVID-19 pandemic, address soaring energy prices and supply chain bottlenecks, which have affected a number of key industries worldwide.

G20 leaders are also signing off on a minimum global tax rate of 15% for big companies, a deal that was finalized earlier this month.

The move seeks to end tax optimization, in which multinational companies — including big US tech firms like Apple and Google parent Alphabet — shelter profits in countries with low-tax systems.

COVID-19 will be a major topic of discussion in Rome. "Leaders are expected to talk about the coronavirus pandemic and how to make sure that vaccine distribution is stepped up and accelerated," von Nahmen said.

Russia and China both asked the G20 countries to mutually recognize their vaccines in video calls to the summit. Neither of the country's leaders, Vladimir Putin and Xi Jinping are physically present at the in-person meetings in Rome.

Leaders also expected to endorse plans to vaccinate 70% of the world's population against COVID-19 by mid-2022 and create a task force to fight future pandemics.

Multiple rallies took place around the G20 talks, including a protest by the Rifondazione Comunista communist party.

Several hundred people assembled at the Piazza di San Giovanni in Laterano, close to the Colosseum on Saturday afternoon. Speakers rallied against Italian Prime Minister Mario Draghi's government, saying his policies were not suited to workers.

Around 10,000 people were expected to join a climate protest organized by the Fridays for Future youth movement, in collaboration with trade unions. Police cleared an early morning protest by a dozen climate activists who blocked the access road to the summit near the Ministry of the Environment. Security has been stepped up in Rome, as previous G20 summits have turned violent.

A 6,000-strong police presence is being bolstered by around 2,000 military personnel but demonstrators will not be allowed anywhere near the meetings themselves. Large parts of the district surrounding the congress center hosting the summit have been cordoned off, and no one will be allowed to enter without special permission.

Airspace will be closed over Rome and border controls will be enhanced to try to keep away potential troublemakers. Violent clashes erupted earlier this month between protesters and police over the extension of Italy's coronavirus pass to all workplaces.

Many of the leaders in Rome, including Biden, will fly immediately afterward to Scotland for the United Nations' climate summit, which kicks off on Sunday. Known as COP26, the talks are seen as vital to addressing the threat of rising temperatures and consequences like rising sea levels, more powerful storms, worse flooding in some regions and worse droughts in others.

COP26 has been billed as the last major chance to galvanize the collective effort needed to limit global warming, with scientists calling for emissions to be cut by nearly half by 2030 to achieve that.

Two UN reports warned this week that the world is "way off track" to cap rising temperatures, with current pledges set to result in an average 2.7 degrees Celsius temperature increase this century.