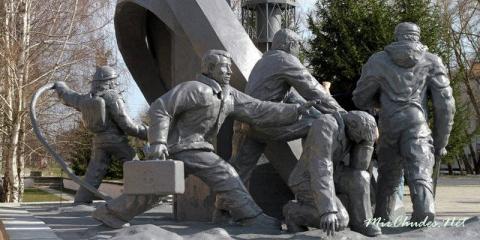 On April 26, 1986, the worst nuclear disaster in history rocked what is now northern Ukraine, after poor design and human error caused a catastrophic explosion in a power plant’s core. Radioactive plumes of steam and smoke spewed from the damaged reactor, releasing about 400 times more material than the atomic bombing of Hiroshima. Within three months of the disaster, 30 employees and firefighters had succumbed to acute radiation poisoning. Over 100,000 people were evacuated, surrendering their homes, cars, photographs, and toys to nuclear fallout.

Humans are slowly returning to the wildness around the power plant. A government workforce, large enough to carefully manage radiation exposure, monitors the reactor and radiation levels in the area. Brave tourists have increasingly ventured into the nearby ghost town of Pripyat, peering into derelict buildings and imagining life in Soviet-era Ukraine. And it’s not just the tourists who are curious.

The contaminated soil of the Chernobyl exclusion zone, a no-man’s land about the size of Yosemite National Park, is ripe for scientific research. The meltdown set the board for the greatest natural experiment of nuclear safety on Earth. By watching the pieces move over time – declining radiation levels, population sizes, cancer incidence in survivors, the slow decay of the abandoned towns and villages in the area – we can learn a lot about how wildlife copes with exposure to low doses of radiation and other long-term effects of nuclear accidents.

A new study by a team led by ecologist Andrea Bonisoli-Alquati, of the University of South Carolina, used a common garden experiment to take this a step further, and brought lesser marsh grasshoppers (Chorthippus albomarginatus), captured within the exclusion zone, into the lab. The controlled lab environment allowed the researchers to investigate the effects of parental radiation exposure alone without worrying about the direct effects of radiation on the babies.

To do this, they bred the grasshoppers, and monitored the development of their offspring. Since radiation breaks DNA into fragments, wrecking it, the researchers also measured the DNA integrity of the haemolymph (insect blood) with neat technique known as a comet assay. They placed extracted DNA on a glass slide and exposed it to an electric current. Because DNA is negatively charged, it moves towards the positive end of the current; with the damaged DNA, the smaller, broken fragments move farther than the heavier, unbroken coils. Scientists use the size of the smear – the comet’s tail – to estimate the amount of DNA damage in a sample.

Radiation exposure to grasshopper parents did not predict how much DNA damage would be found in their offspring.Grasshoppers whose parents received a heavy dose of radiation – 50.05 microsieverts per hour, or the equivalent of three chest X-rays – had the same amount of DNA damage as the grasshoppers with parents that received a benign level, of 0.03 microsieverts per hour (less radiation than the amount released by a banana).

They probably benefited from supercharged coping mechanisms that limited the effects of radiation. For example, grasshoppers from highly contaminated sites may be better at preventing DNA damage because they have more antioxidants, or because they have more effective proteins to tidy up broken DNA strands. These coping mechanisms may also explain why the children of grasshoppers from more contaminated sites also survived better, since severe DNA damage impairs cell function and health.

The grasshoppers are one small illustration of how Mother Nature has a habit of clawing her way back from the brink, making adjustments, and reclaiming the scraps cast off by humanity. Following the disaster that 1986 spring, the rest of the year was hard for plants and animals in the zone, where their health and reproductive abilities were negatively affected. Many of these populations have since rebounded, and as of 2015, the populations of mammals within the zone are similar to those in a nearby, unaffected area.

Such resilience is remarkable, considering that the most radioactive parts of the zone will be unsafe for human habitation for 20,000 years. With human interactions limited to about 200 elderly samosely (“self-setters”) begrudgingly allowed to stay, the forests around Chernobyl is now a de facto wildlife sanctuary.

In other words, humans appear to be worse for animals than radioactive fallout.

Years of research show that the exclusion zone is far from the wasteland we often imagine in depictions of some apocalyptic, post-World War III nuclear winter. A recent census combining helicopter flybys and animal track surveys showed that wolves are seven times more abundant in the exclusion zone than in outlying areas. Camera traps reveal that rare animals, like the elusive Eurasian lynx and brown bears, last seen in the area over a century ago, had gained a foothold in the area. During the turbulent 1990s, when rural poverty increased and wildlife management atrophied, putting many large game animals at risk, the zone was one of the few parts of the former USSR that avoided steep declines in moose and wild boar populations.

Some species have even learned to taken advantage of their unique situation – a black fungus has been seen growing on the reactor core. When curious scientists brought some of the fungus back into the lab and hit some of the fungus with radiation, they found it grew faster – it seems to have adapted to use the ionizing radiation given off by the reactor to make energy.

That’s not to say wildlife escaped the disaster unscathed. Some researchers challenge the view that wildlife populations have increased at all. Many invertebrates, like butterflies and spiders, are scarce in the most radioactive zones. Unlike roaming wolves and deer, invertebrates live and eat in a very small area, and can’t avoid living in highly contaminated areas. Swallows have been found with smaller brains and beak deformities, mutations attributed to radiation exposure, though others have suggested that the decline in human activity (swallows, like pigeons, co-exist well with humans) might really be to blame. Because radiation levels increased in the zone at the same exact time that humans deserted it, it’s hard to distinguish which factor, human abandonment or lingering radiation, caused which effects.

Such confounding effects are common in the observational, natural experiment studies which make up the majority of the scientific literature around the Chernobyl disaster, and data that would help solve this problem remains elusive. For example, we know very little about the incidence of cancers, birth defects, genetic mutations (all lingering, classic effects on radiation) in wildlife living in the zone.

The post-disaster story of Chernobyl is complicated, and not nearly as doom-and-gloom as many predicted in the late 1980s. The natural world has an outstanding capacity to absorb and respond to catastrophes.

But this amazing capacity comes with caveats. No ecosystem ever recovers completely from a disaster like Chernobyl. Instead, it changes and adapts. Human influence and climate change, the great new ecological challenges of our time, will likely led to similar complex, unpredictable effects.

Some species, like rats and swallows, will adapt, do well, or even thrive. Others, like elephants and bison, may fail to adjust and do much worse – or become extinct. For most species, we don’t know enough about them to project one way or the other. The surprising second chance at life for the animals of the Chernobyl exclusion zone demonstrates just how unpredictable evolution can be.