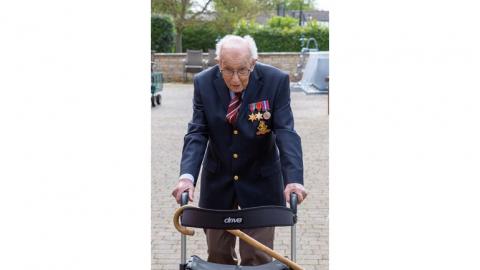 A 99-year-old war veteran has raised a staggering £15m for NHS staff after reaching his goal of walking 100 laps of his garden. Capt Tom Moore had hoped to achieve the target in time for his 100th birthday on 30 April, and walked the last 25 lengths on live TV on Thursday morning, with a guard of honour from the 1st Battalion of the Yorkshire Regiment by his side.

“I’m surrounded by the right sort of people so I’m feeling fine,” Moore said as he completed his laps to a round of applause. “It was just so emotional,” said his daughter, Hannah Ingram-Moore. “I mean, how special for his own regiment to be there as a guard of honour. We were just thrilled and incredibly proud.”

She said her father was now “absolutely galvanised” and had vowed to keep on walking for as long as the donations keep flowing in. When Moore started his fundraising on 8 April, he hoped to raise £1,000 for NHS Charities Together, but after raising £70,000 in 24 hours he extended his target to £1m.

Following a number of TV appearances from his home in Bedfordshire, where he lives with his daughter and grandchildren Benjamin and Georgia, he hit £1m on Tuesday morning, and the total rose to £4m by that night. “At no time when we started off with this exercise did we anticipate we’d get anything near that sort of money,” Moore told the BBC. “It just shows that people have such high regard for matters of our National Health Service and it’s really amazing that people have paid so much money.”

JustGiving said Moore had broken the platform’s record for the largest total ever raised through a single campaign, while announcing that its parent company, Blackbaud, was donating £100,000 to the cause. Originally from Keighley in West Yorkshire, Moore trained as a civil engineer before serving in the second world war, rising to captain and completing postings in India and Burma. “Our brave nurses and doctors are frontline in this case … this time our army are in doctors’ and nurses’ uniforms and they’re doing a marvellous job,” Moore said earlier this week.

Moore has received multiple messages of thanks from NHS workers, sports personalities and politicians, with the chancellor, Rishi Sunak, saying: “What you’ve done is extraordinary … as an adopted Yorkshireman, I’ve come to recognise true Yorkshire grit.”

He was also praised by the health secretary, Matt Hancock, during Wednesday’s coronavirus press conference. “Captain Tom, you’re an inspiration to us all, and we thank you,” he said. There are now calls for Moore to be recognised with an official honour from the Queen, while eight-year-old Reegan Davies, from Port Talbot in south Wales, has started an online campaign for children to make and share birthday cards for his 100th birthday, under the hashtag #makeacardfortom.

In the meantime, Moore is trying to come to terms with the unprecedented success of his endeavour. “He’s happy, he’s thrilled,” his daughter said. “I think he’s living it a little bit on adrenaline but he’s soaking it all in.”﻿