Broken Jewish tombstones made into memorial in Prague 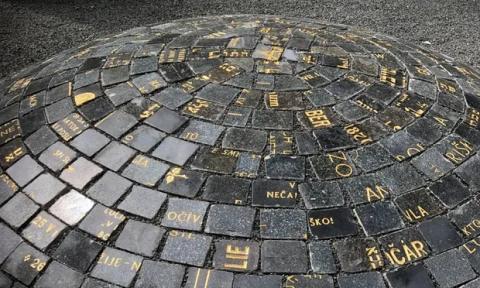 The desecration of Jewish cemeteries under the communist regime of the former Czechoslovakia has been given official recognition with a new memorial fashioned from headstones that were carved up and used for paving stones in Prague.

The Return of the Stones monument, consisting of 7 tonnes of broken tombstones, was unveiled on Wednesday in the Czech capital’s old Jewish cemetery, which itself was partly desecrated to make a public park before becoming the site of the city’s soaring television tower.

In the shadow of the 709ft (216-metre) tower, Karol Sidon, the Czech Republic’s chief rabbi, recited a Hebrew blessing for the new structure, which was commissioned by the local Jewish community after the cobblestones were dug up in Prague’s Wenceslas Square in May 2020 at the start of an extensive facelift.

The paving stones are thought to have been made from headstones taken from Jewish cemeteries in the northern Bohemia region during the communist period, which ended in 1989 when the Velvet Revolution ushered in a new era of democratic rule.

They were laid in Wenceslas Square in a pedestrianisation project carried out in preparation for a visit by the then Soviet leader, Mikhail Gorbachev, to Prague in 1987.

Prague city council handed them over to the Jewish community as part of a prior agreement drawn up amid widespread suspicions that they were made from headstones taken from graveyards. It has not been possible to identify any individuals commemorated by the headstones.

František Bányai, the chairman of Prague’s Jewish community, called the paving stones a “symbol of barbarism, rudeness and archaic ruthlessness” and compared the former communist regime’s treatment of cemeteries and religious sites to Russia’s invasion of Ukraine.

The memorial, whose £28,000 cost was paid for by private donors and a public crowdfunding campaign, was the work of a Czech sculptor, Jaroslav Róna, and his wife, Lucie, an architect.

“The idea is that the memorial acts as a place of meditation and commemoration for those people who know that the cemeteries where their relatives lay were destroyed,” the sculptor said. “They can come here and spend some time.”

More headstones are expected to be discovered elsewhere in the square during future work. They will be used to extend the memorial.