The Book of Numbers 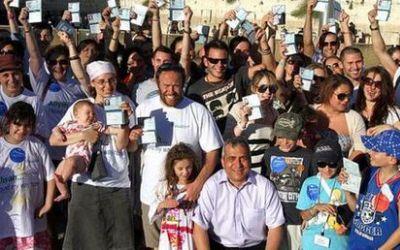 Jewish ambivalence about demography goes back a long way. The Bible, in several places, meticulously enumerates each tribe's population even while warning that conducting head counts can bring dire consequences. Such consequences are realized in the Book of Samuel, in which the Israelites are punished severely for a census conducted by King David. According to the Book of Chronicles, the census was incited by Satan himself.

Sergio DellaPergola, the dean of contemporary Jewish population studies, has no such hang-ups. In his new book Jewish Demographic Policies: Population Trends and Options in Israel and in the Diaspora (available as a free PDF download), he declares that "demography is not a problem, a demon, a ghost, or voodoo"—though he grants that when it comes to the Jews' low numbers, "it is plausible to speak of an emergency." Now an emeritus professor after a distinguished career at the Hebrew University in Jerusalem, DellaPergola prepared this volume for the Jewish People Policy Institute, which describes itself, in appropriate bureaucratese, as a "central focal point for developing policy proposals directed at facilitating the pluralistic thriving of the Jewish People."

DellaPergola's bad news is that world Jewry "is quite close to zero population growth." Indeed, "India's contemporary annual population growth is significantly higher than the entire world Jewish population." He claims that Israel, with a Jewish population closing in on six million, is the only demographically thriving major Jewish center: It has already surpassed the United States in numbers and is likely to be home to a majority of the world's Jews in another two decades.

The forces driving this trend are Israel's relatively high Jewish birthrate and young age distribution and the Diaspora's high rates of attrition and intermarriage. Though DellaPergola insists that he interprets the data as he sees it and not from an "Israelo-centric perspective," he concludes—Israelo-centrically—that the "core state" now "constitutes a source of meaning, pride and strength for the Jewish communities outside of it, and Jewish communities worldwide constitute a source of support, wisdom and strength for the core state."

The claim that Israel has more Jews than any other country has been vociferously challenged. It rests primarily on findings of the controversial 2001 National Jewish Population Survey, funded by United Jewish Communities (UJC), which found just 5.2-5.3 million Jews in the United States. That study came under such heavy attack on methodological grounds (and cost so much money) that UJC has not attempted anything similar since. Truth be told, since the U.S. Census does not ask about religion and defining a Jew is so difficult in any case, no one really knows how many American Jews there are. American demographers, some using national surveys conducted for other purposes and others totaling up figures from local Jewish community studies, have suggested higher figures, ranging from 6.5 million to 7.5 million or more.

In discussing Israeli demography, DellaPergola makes another controversial claim: that Jewish predominance in Israel—and, hence, the country's survival as a Jewish and democratic state—is possible only if Israel relinquishes West Bank land (or swaps equivalent Israeli territory) that is predominantly inhabited by Arabs. Otherwise, he warns, high Arab birthrates could bring an end to the Jewish majority between the Mediterranean Sea and the Jordan River as early as 2020. The demographic argument for making territorial concessions would seem to have the virtue of skirting the subject's political, nationalistic, and religious minefields; but DellaPergola has been attacked for accepting what some believe are bloated estimates of the Palestinian West Bank population and for not considering the possibility that the Arab birthrate, already in decline, might drop even further.

But the criticisms by DellaPergola's detractors, even if they have a degree of truth, can only postpone, not eliminate, the problematic scenarios he sets out for the United States and Israel. Even if there are more American Jews than DellaPergola estimates, it remains very likely that their numbers will gradually decline. Even if there are fewer West Bank Arab children than he thinks, this fact will give Jews in Israel and the territories no more than a few additional years before their minority status confronts them.

The report makes practical recommendations. They include good ideas, like financial help for Israeli families that want a third or fourth child; vague, wishful prescriptions to address problems that no one knows how to solve ("limit the erosive effects of assimilation and intermarriage"); and a demographers' relief act: "A coordinating body should be formally charged with overseeing demographic policy planning for Israel and world Jewry."

Even some sensible recommendations are presented without enough attention to political realities. One such idea—to "facilitate return of Israelis abroad"—was tried a few months ago. Israel's Ministry of Absorption launched an advertising campaign aimed at Israelis in the United States, warning them that their American-born children will not know Hebrew, will lack a connection to Israeli culture, and could even replace Hanukkah with Christmas. The ads were withdrawn after the American Jewish establishment reacted angrily, calling them insulting and demeaning. Ironically, that very week the UJA-Federation of New York inadvertently demonstrated the rationale for the ad campaign with the announcement: "We are not endorsing interfaith marriage or condemning it."

Most puzzling is why DellaPergola neglects the Jewish subpopulation that is producing the most children—the Orthodox/Haredi sector. While they do receive government benefits in Israel, their fecundity stems primarily from a religious commitment to bring many children into the world. Is there any way to translate their ideal into less sectarian terms so that the rest of world Jewry can learn from their example? DellaPergola does not consider the question.

DellaPergola deserves great credit for his incisive analysis, and a careful implementation of some of his recommendations could yield positive results. But the Jewish people, who have waited for millennia for the fulfillment of God's promise to make Abraham's descendants as numerous as the sand on the shore and the stars in the sky, will probably have to wait a while longer.