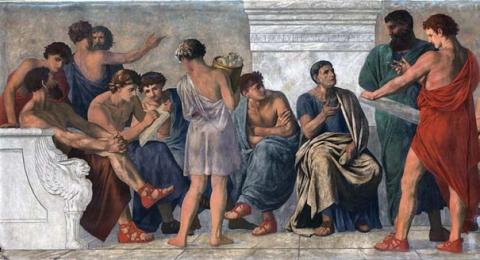 In the current Russian political climate, ethical reasoning is no longer a recreation but a necessity. Although the country is stuck in a moral quagmire, a new system of ethics is being born—through contrariness. When the Soviet Union collapsed in 1991, so did its authoritarian ethics system of self-sacrifice and collective responsibility. At the time, everyone expected that capitalism would bring with it a new, humanist system, focused on the individual, their life, freedom, and liberties. But the unrestrained consumption of the 2000s affected neither the ethics nor the mass consciousness of post-Soviet Russians. The paradox of the 1990s is that in place of the Soviet authoritarian ethics, nothing appeared at all. There’s a huge hole at the center of Russian society where ethics should be.

Unlike authoritarian ethics, it’s impossible to force humanist ethics onto a population. They must be born naturally, through discourse. The state can give a push in the right direction, but this requires a modicum of political will. Society must be willing to publicly discuss such issues as what is good and evil, what we should live for, and what constitutes meaning. In the 1990s, Russian society wasn’t ready to discuss such questions. It didn’t even understand that such a discussion was necessary.

The only entity that bothered to bring up questions of ethics in the early 1990s was the church, the only carrier of non-authoritarian ethics. But the church behaved as if seventy years of Soviet rule was a black hole: in order for the nation to recover its moral principles it simply had to revert to the way things were before 1917, which was a utopian desire. The church could have become the main intermediator between the individual and the new ethical system. It should have been the institution that raised the most important ethical questions—how to combine profits and compassion, capitalism and humanity. But the problem of ethics was not solved and in place of nothing, a stand-in appeared.

The Russian value crisis of the 1990s heralded the end of ethics, an intentional refusal of humanism, a nihilism still apparent in the diatribes of contemporary propagandists. From anti-ethics comes the ethics of neo-Stalinism. But the people who utter the phrase, “Put them up against the wall,” are not necessarily true Stalinists. They repeat, “There was order under Stalin,” because their own mind is a mess. They murmur, “Stalin would have taken care of it,” because they don’t know how to take care of it themselves. This is the echo of totalitarian ethics, a system for which Russia never found a replacement.

With the ethics of neo-Stalinism come the ethics of war, which contain no plans for the future, only the catastrophic philosophical belief that with war comes cleansing. Today’s return to war ethics—us/them, friends/enemies—is not so much a demonstration of aggression as of uncertainty, a subconscious attempt to find some sort of support beam.

Although it first appeared as a kind of intellectual game, by the 2000s, anti-ethics had become a semi-official governmental doctrine—“we are no better but no worse than others either; everyone in the world behaves equally badly”—though it is never articulated. Anti-ethics doesn’t contain anything positive; it’s built solely on the denouncement of others’ value systems. Its fundamental negativity is based on the following idea: individuals are unable to decide for themselves what is good and what is bad. Only the government can see the big picture and therefore make ethical evaluations.

Dismissing ethics as a criterion solves the problem of evaluating the past. As soon as we stop worrying about repression, social experimentation, and their victims, the past turns into an automatic movement toward today’s greatness. “He [Stalin] did start a bit of a genocide, but on the other hand he did wonders for the economy,” observed participants in a study at the Higher School of Economics.

The last two years have seen a hybrid of authoritarian and negative ethics. Soviet ethics are invoked when they serve a useful function (“we’re always right”) but when necessary, negative ethics come to the rescue (“everyone is as bad as each other”). We’re left with doublethink. To sum it all up in a single syllogism: We’re always right because everyone else is lying.

Groping around for any sort of basis for this ethical system yields only nothingness. But the unsolved problem constantly reminds us of itself by giving rise to monstrous and absurd forms of antagonism: against migrants, liberals, gays, Ukraine, the United States, the West, and the world. Unmotivated aggression, the urge to teach the world a lesson—or just beat it up, as in Euro 2016—stems from the unresolved question of ethics. A new ethical system must answer the most important questions of post-Soviet society, first and foremost about the value of peace. Russians must place human life above death and establish peaceful ethics as a counterweight to militarism.

New ethics must allow for the conscious acceptance of our troubled history. Reconciliation and forgiveness must come, but they must be intentional, part of a willful decision to forgive each other and to forget past wrongs. We must be willing to question whether the main threat to our society is internal or external. We must accept the responsibility to first deal with the evil inside ourselves, not in others. We need to reframe our attitudes toward money, riches, and work. Questions of wealth and poverty need to be solved within an ethical framework.

The concept of work is, itself, in dire need of rethinking from an ethical standpoint. Is it possible to go about your work without thinking about its moral consequences, for example, if you work at a propagandistic news outlet? Russian rulers have been flirting with Soviet rhetoric for a while now. This is a dangerous game. Anti-liberal rhetoric is growing into an outright rejection of capitalism. By humoring the masses, the government is falling into a trap wherein it is necessary to defend capitalism’s very right to exist. Instead of rejecting capitalism they should be explaining how to use it, humanizing it instead of discrediting it with artificial handwringing.

The current Russian political climate forces one to make an ethical choice. Did anyone take politics half so seriously ten years ago? Did we think about “fighting for peace?” Did we pay so much attention to the propaganda on the radio and TV? Ethical reasoning can no longer be counted as a recreation but a necessity. Although the country is stuck in a moral quagmire, a new system of ethics is being born—through contrariness. It’s still in its infancy, and usually takes the form of negations like “don’t lie, don’t steal.”

Propaganda’s dehumanizing effect is one of the tragic lessons of modernity. But we must take the time to understand what is happening inside the minds of the Russian populace. We must investigate the prejudices and phobias, destruction and hate—mainly toward oneself—that exist today. We know the cause. It’s the absence of a clear, articulated explanation for the question, “What are we living for and what do we want?” Knowing what we do, we should experience a passionate desire to help these people, because they are the primary victims of their own ignorance.

Without new values, ones that mesh with a society of consumption, capitalism will not work. All attempts to solve the problem automatically, relying on the rules of the market, are doomed. Without a new conception of the self and consequently a new ethical system, it’s impossible to build either a society or an economy, for neither can flourish when people don’t know how to exist.