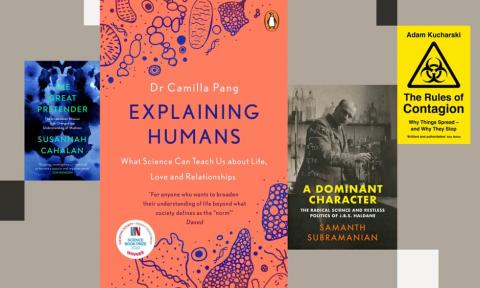 In one of many unexpected outcomes of 2020, “the science” has become big news. Politicians are claiming it, protesters are disputing it, and all of a sudden everyone is an expert on superspreader events, RNA vaccines and what happens at the bottom of an Excel spreadsheet. It’s hard to know who to trust, and it’s more important than ever that the public has a basic understanding of what “science” says, so we are less likely to be deceived. Fortunately, a number of excellent writers are here to make it accessible, absorbing and staggeringly informative.

The topical Outbreaks and Epidemics by Meera Senthilingam (Icon), for example, is crammed with information on the history and context of diseases we think we know about. It explains how effective track and trace, combined with a thorough vaccination programme, was crucial in the eradication of smallpox, and why climate crisis and drug resistance make future pandemics more likely. It further shows how politics affects the way we treat disease: the chapter on tuberculosis is titled “What happens when nobody cares”. It even manages a last-minute update about Covid-19. (We could have been a lot more ready if we’d really wanted to be.)

Adam Kucharski’s The Rules of Contagion (Wellcome Collection) also offers great explanations of the R-number, herd immunity and mathematical modelling, but its aim is to apply the principles of epidemiology to other “infections” – from financial contagion, gun violence and the ice-bucket challenge to marketing, innovation and culture. We know now that the pre-2008 banking system had “massive potential for superspreading”, for example, and we can use “public health” theories to combat knife crime. It also demonstrates why scientific models can’t entirely account for the spread of disease. After losing a fortune in the South Sea Bubble, Isaac Newton apparently complained: “I can calculate the motion of heavenly bodies but not the madness of people.”

The weirdness of people is the inspiration for Explaining Humans by Dr Camilla Pang (Viking), a biochemist who has autism spectrum disorder and ADHD. She describes the book, which won the 2020 Royal Society prize, as “the manual I … always needed” to understand human behaviour and how to fit in, and it does an extraordinary job of explaining how Bayes’s theorem applies to relationships, what game theory can teach us about etiquette, and why a tidy bedroom is an affront to the second law of thermodynamics. It also introduces complex ideas to non-scientists in a warm and memorable way, while celebrating and demystifying neurodiversity: “ASD and ADHD are my qualifications every bit as much as my PhD,” Pang argues.

The Great Pretender (Canongate) was also inspired by a personal story. Its author, Susannah Cahalan, was diagnosed as having schizophrenia and almost got lost in the mental health system, until a persistent doctor found a physical diagnosis for her condition and she was cured. Her subsequent questioning of the division between “mental” and “physical” illness led her to uncover a famous study from 1973, in which a group of mentally healthy researchers presented themselves at psychiatric hospitals, complaining they could hear voices, and were diagnosed as having serious psychiatric illnesses. The experiment rocked the world of psychiatry, but Cahalan’s research suggests that all was not as it seemed. The book is a fantastic scoop, a fascinating history of psychiatry and a powerful argument for why science is often about challenging accepted wisdom.

Linda Scott doubtless had some personal reasons for writing The Double X Economy: The Epic Potential of Women’s Empowerment (Faber), but the result is one of the most objective, data-led, rigorously scientific and morally persuasive books of the year. Scott’s argument is simple: “Equal economic treatment for women would put a stop to some of the world’s costliest evils, while building prosperity for everyone.” She backs it up with economic, environmental and evolutionary science while proposing “concrete, reasonable and effective action”. Never before has an analysis of supply-chain economics resulted in so many fists in the air. This is a book that will make people think, and act.

One of the most touching biographies of the year shows the human side of the great physicist Stephen Hawking, as seen by his friend and collaborator Leonard Mlodinow (Allen Lane). With admirably easy-to-grasp digressions into favourite subjects such as Einstein, dark energy and black holes, Mlodinow tells us about Hawking the man. We learn that he didn’t like physics at school because Newton was boring and how he “was nourished by love as much as physics”. He also stored in his computer’s voice the canned phrase, “Thanks, but did you finish it?”, for fans who approached him to compliment his book.

Samanth Subramanian’s biography of JBS Haldane, A Dominant Character (Atlantic), reveals another flawed and brilliant scientist. A geneticist who helped to define our understanding of evolutionary biology, Haldane was described by Arthur C Clarke as “the most brilliant scientific populariser of his generation”, and by a student as “the last man who knew all there was to be known”, but he also excused Stalin’s attacks on scientists and science. The book shows how politics and science are often bound up together, and the dangers of allowing political principles to corrupt scientific ideas. It’s deliciously full of danger, adventure and scandal.

Perhaps the most unusual science book of the year is Sand Talk by Tyson Yunkaporta (Text), which he describes as “a series of yarns with diverse people who all make me feel uncomfortable”. Yunkaporta examines subjects such as food, medicine, gender relations and financial and environmental systems by using visual symbols to represent his thinking – he carves objects, and draws pictures in sand. “I’m not reporting on Indigenous Knowledge systems for a global audience’s perspective,” he says. “I’m examining global systems from an Indigenous Knowledge perspective.” It’s a dramatically new (to some) and absorbing way of engaging with the world, and stops just short of exasperation with self-important “western science”. “Silly thinking is something everybody is guilty of from time to time,” Yunkaporta writes. “It is forgivable as long as you’re still listening.” It illustrates perfectly that there is no such thing as “the science”, that we should question anyone who tries to claim scientific thought as their own, and that intellectual curiosity is everything.