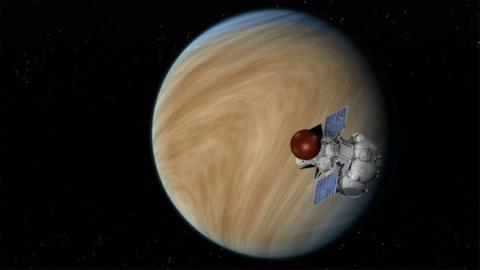 After decades of neglect, hellish and cloud-enveloped Venus—sometimes called Earth’s evil twin—is a world ready and waiting for renewed exploration. That is the message from a new study released late last month from NASA’s Jet Propulsion Laboratory, with one important caveat: The best way to return to Venus, the study’s contributors argue, may be to fly our sister world’s surprisingly friendly skies.

Despite surface temperatures and pressures that would melt metal and crush heavy machinery, conditions are far more clement—hospitable, even—higher in the planet’s atmosphere. Balloons, planes and other high-tech aerial platforms could take advantage of that benign environment to glean otherwise-inaccessible data about Venus’s atmospheric composition, circulation and even its prospects for life, says study lead James Cutts, a program manager in JPL’s Solar System Exploration Directorate. “What we’re talking about here is a platform that operates in a region of the Venusian atmosphere where the temperature is benign, ‘Earth-like’ in a word,” he tells Scientific American.

Cutts said the report and its findings, involving over 50 individuals from various institutions, will feed in to the next planetary science decadal survey slated to start in 2020. The goal is for the National Academy of Sciences to deliver its final report to NASA in 2022. That authoritative appraisal would draw heavily on the views of the planetary research community to provide a blueprint for the space agency and congressional appropriators to follow in planning future missions.

The JPL evaluation looked at fixed- and variable-altitude balloons, along with a hybrid airship that could use both buoyancy and aerodynamic lift to bob along through the Venusian cloudscape and a fixed-wing, solar-powered aircraft that could soar on sunlight and convective air flows. From such lofty perches any of these platforms could deploy probes, snap images and perform a host of other scientific experiments.

Of these, the study concluded variable-altitude balloons are “the optimal choice,” because they are in a “sweet spot” that balances high mobility with technological simplicity to offer NASA an ambitious-but-achievable option for a mission launching sometime between 2023 and 2032. There are no technological show-stoppers for such a mission, the study’s authors say. Still, investments in new science instruments are needed, as are modeling tools to better understand the behavior of a vehicle flying or floating high above the alien world.

Surprisingly, this burgeoning “back to Venus” campaign has benefited from recent developments in Silicon Valley—namely Google’s Project Loon, a growing network of long-lived balloons designed to deliver connectivity to people in internet-deprived communities across the globe. For instance, following last year’s devastating landfall of Hurricane Maria in Puerto Rico, the Loon program provided crisis links to over 200,000 people while telecommunications networks on the island were being restored.

Using an “air ballast” approach in which an outer air-filled layer is used to modulate the lifting power of an inner helium-filled balloon, the Loon program has shown they can accurately navigate and operate their vehicles for up to 190 days at 12 miles altitude even when faced with high winds. Within the denser, hotter atmosphere of Venus such a craft would likely float much higher, loitering about 40 miles above the landscape below. “The fact we have this experience with Google Loon is a big boost in saying this stuff works,” Cutts says. “If we can make it happen in a very similar environment on Earth, we can do it at Venus, too.”

But why Venus, and what’s new? “Venus had a steady stream of missions in the early days of interplanetary exploration. However, there have been only three direct missions to the planet in the last 25 years,” says Lori Glaze, acting director of the Planetary Science Division at NASA Headquarters.

NASA’s last mission to Venus was Magellan, launched in 1989, which mapped the surface of Venus. In 2006 the European Space Agency’s Venus Express mission entered the planet’s orbit and provided scientists with a richness of atmospheric data until 2014. At present the only spacecraft at Venus is Japan Aerospace Exploration Agency’s Akatsuki mission, which was launched in May 2010 and arrived in Venusian orbit in December 2015 to study the structure and dynamics of the planet’s atmosphere and clouds. “Today there is increased international interest from Europe, Russia and India in understanding Venus. U.S. scientists have also proposed many concepts to NASA’s competitive mission opportunities,” Glaze says.

Venus provides a laboratory next door to Earth to study how rocky planets can form and evolve differently from Earth even when they start out very similar, Glaze says. “As we discover new worlds orbiting other stars, it is becoming increasingly important that we fully understand the full range of evolutionary pathways that rocky planets can take so that we can better identify which of these exoplanets are most suitable to harbor life.” The planetary science community is already preparing for the next planetary science decadal with mission-concept studies “and Venus is one of the subjects that is on our radar,” she adds.

“It is clearly true that Venus is under-explored compared to other targets—and compared to the magnitude of the planet’s scientific importance,” says astrobiologist David Grinspoon, a senior scientist at the Planetary Science Institute. “At some point, that kind of becomes an embarrassment,” he says. Everything that has been learned about Venus over the ensuing decades made it more of a compelling scientific target, he notes. In particular, recent modeling of the planet and its past climate suggests it probably had a large ocean and was habitable for much of its lifetime. “Venus perhaps having [had] habitable surface oceans leads to all kinds of fascinating possibilities. It may have exchanged life with Earth. The story of biological evolution on Earth may involve Venus,” he says. “There were probably two oceanic planets—Venus and the Earth—right next door to each other for maybe half the history of our solar system.”

That is a view shared by Robert Grimm, a planetary scientist at the Southwest Research Institute. He is also the current chair of NASA’s Venus Exploration Analysis Group (VEXAG) and a prominent contributor to the JPL study on aerial platforms. “Venus may have been the first habitable planet in the solar system,” he says.

According to Grimm, there are three main themes for future Venus exploration: understanding its atmosphere, learning why its geology is so different from Earth and discovering what happened to all the water that may have once filled Venusian oceans.

Venus is close to Earth in size and mass, made of basically the same rock and metal—so it is often called Earth’s twin. “But the similarity ends there,” Grimm says. Venus has a massive carbon dioxide atmosphere that at the surface is a crushing 90 atmospheres of pressure and is over 800 degrees Fahrenheit. While calm at the surface, high-altitude winds are over 200 miles per hour. How and when the fates of Earth and Venus so profoundly diverged remains a topic of intense debate that can only be settled by much more data.

Further afield, in the realm of exoplanets, researchers wish to learn how best to discern Venus-like hell worlds versus Earth-like Edens circling other stars. Venus is part of the template for terrestrial planets, Grimm says, “and understanding how terrestrial planets evolve, both in their atmospheres and their surfaces, lets us know where in the universe does ‘Earth-size’ mean ‘Earth-like.’”

RETURN TO THE FORGOTTEN WORLD

What next for airborne Venus exploration? Among possible avenues is a U.S.-provided aerial platform for a joint U.S.–Russian mission called Venera D. A NASA and Russian Academy of Sciences’ Space Research Institute science definition team has been deliberating on the mission for almost four years, with a new report to be issued early next year. Russia would furnish a Venus lander and orbiter and the U.S. could contribute an aerial platform. Since the 1960s the Soviet Union had repeatedly sent spacecraft to Venus, including several heavy-duty landers that successfully, albeit briefly, relayed imagery from the surface before succumbing to the planet’s harsh environment.

NASA will also soon begin studying a Venus Flagship mission in preparation for the upcoming planetary science decadal survey. Other avenues for embarking on a new round of Venus exploration could be via NASA’s more modestly funded Discovery and New Frontiers programs or possibly even smaller missions exploiting CubeSat technology. NASA’s Glaze says that with the increased interest in such technology, the community is seeing additional opportunities to leverage that capability to understand the planet’s past, present and future.

“Venus is the forgotten planet,” says JPL’s Cutts, who hopes the 2020s will prove to be “the decade of Venus” for planetary science. “Between now and then we need to get ready and be positioned to have these technologies maturing.”