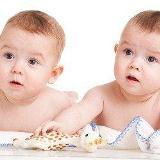 “That’s not fair!” It’s a common playground complaint. But how early do children acquire this sense of fairness? Before they’re 2, says a new study. “We found that 19- and 21-month-old infants have a general expectation of fairness, and they can apply it appropriately to different situations,” says University of Illinois psychology graduate student Stephanie Sloane, who conducted the study with UI’s Renée Baillargeon and David Premack of the University of Pennsylvania. The findings appear in Psychological Science, a journal published by the Association for Psychological Science.
In each of two experiments, babies watched live scenarios unfold. In the first, 19-month-olds saw two giraffe puppets dance around at the back of a stage. An experimenter arrived with two toys on a tray and said, “I have toys!” “Yay!” said the giraffes. Then the experimenter gave one toy to each giraffe or both to one of them. The infants were timed gazing at the scene until they lost interest. Longer looking times indicated that something was odd—unexpected—to the baby. In this experiment, three-quarters of the infants looked longer when one giraffe got both toys.

In the second experiment, two women faced each other with a pile of small toys between them and an empty plastic box in front of each of them. An experimenter said, “Wow! Look at all these toys. It’s time to clean them up.” In one scenario, one woman dutifully put the toys away, while the other kept playing—but the experimenter gave a reward to both the worker and the slacker. In another scenario, both women put the toys away and both got a reward. The observing 21-month-old infants looked reliably longer when the worker and the slacker were rewarded equally.

“We think children are born with a skeleton of general expectations about fairness,” explains Sloane, “and these principles and concepts get shaped in different ways depending on the culture and the environment they’re brought up in.” Some cultures value sharing more than others, but the ideas that resources should be equally distributed and rewards allocated according to effort are innate and universal.

Other survival instincts can intervene. Self-interest is one, as is loyalty to the in-group—your family, your tribe, your team. It’s much harder to abide by that abstract sense of fairness when you want all the cookies—or your team is hungry. That’s why children need reminders to share and practice in the discipline of doing the right thing in spite of their desires.

Still, says Sloane, “helping children behave more morally may not be as hard as it would be if they didn’t have that skeleton of expectations.”

This innate moral sense might also explain the power of early trauma, Sloane says. Aside from fairness, research has shown that small children expect people not to harm others and to help others in distress. “If they witness events that violate those expectations in extreme ways, it could explain why these events have such negative and enduring consequences.”