Attempts to outlaw Jewish and Muslim life in Europe 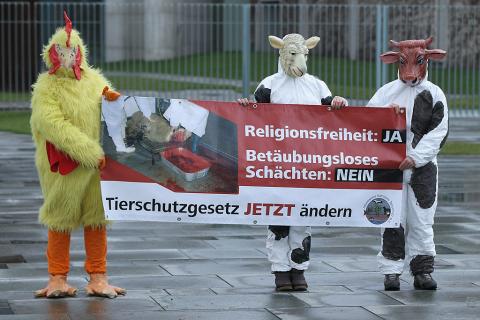 This past month, in an attempt to suppress a new coronavirus mutation, Denmark killed all 17 million of its mink. I thought about this episode over the weekend, after Europe’s highest court opted to uphold several Belgian regional bans on kosher and halal animal slaughter, cutting off the only local source of meat for observant members of two faiths.

You see, six years ago, Denmark also banned kosher and halal slaughter for being cruel to animals—while continuing to be the world’s largest fur producer. That’s why they had all those mink in the first place. In this way, Denmark is emblematic of how “animal rights” is used as cover by Europe’s culturally Christian majority to persecute Muslim and Jewish minorities. The country was happy to express its deep and abiding concern for animal welfare, just as long as the price was paid by despised religious sects with no political or economic clout, and not by the rest of the population.

Belgium does not export mink, but it does engage in factory farming of everything from chickens to turkeys. These are actual industries that service the entire country. By contrast, there are only 30,000 Jews in Belgium’s population of 11.5 million, and approximately 570,000 Muslims. In other words, in practice, the country’s kosher and halal bans will not substantially protect the rights of animals so much as suppress the rights of Muslims and Jews. The policy asks nothing of the general population and will have no impact on their lives or food consumption. It just sends an ugly message insinuating that Jews and Muslims are uniquely depraved when it comes to animal rights, when in reality, they are just easy targets. While defenders of such efforts would like the debate to be about animal rights, even a cursory glance shows that it’s really about something else.

This is how anti-Semitism, among other bigotries, has often operated: as cost-free virtue signaling that enables the majority to claim that it cares about a moral problem, while scapegoating minorities for it and never sacrificing anything themselves.

This more aristocratic expression of anti-Semitism is far more common in Europe than many realize. Back in 2017, far-right French leader Marine Le Pen—who placed first in the first round of the country’s last elections—reiterated her support for banning Jewish skullcaps in public spaces, as part of an overall ban on (mostly Muslim) religious attire to preserve the country’s secular square. “The struggle against radical Islam should be a joint struggle and everyone should say, ‘there, we are sacrificing something,’” she told an Israeli outlet. This stance raised a question: If everyone was being asked to sacrifice something—notably, Jews and Muslims and their distinctive dress—what about Christians? Conveniently, Le Pen asserted, “the Catholic religion doesn’t have conspicuous symbols.” As it turned out, the costs of the noble struggle for French secularism would be borne by minorities, not the majority.

One can observe this same selective standard at work in last week’s EU Court of Justice ruling affirming the kosher and halal bans in Belgium. It arises when the court tries to dispense with a pretty obvious question: The bans require that animals be stunned before being slaughtered (something that invalidates the religious rite). But if stunning is necessary for animal welfare, shouldn’t it also be required when it comes to much more widespread nonreligious practices in Europe, from hunting to the killing of animals in recreational and cultural events?

Absolutely not, ruled Europe’s highest court, offering an escalating series of self-serving distinctions that deserve to be quoted in full (emphases added):

Protocol No (33) underlines the need to respect the legislative or administrative provisions and customs of the Member States relating, in particular, to religious rites, cultural traditions and regional heritage when formulating and implementing the [European Union’s] policies on, inter alia, agriculture and the internal market. It is therefore appropriate to exclude from the scope of this Regulation cultural events, where compliance with animal welfare requirements would adversely affect the very nature of the event concerned.

In addition, cultural traditions refer to an inherited, established, or customary pattern of thought, action or behaviour which includes in fact the concept of something transmitted by, or acquired from, a predecessor. They contribute to fostering long-standing social links between generations. Provided that those activities do not affect the market of products of animal origin and are not motivated by production purposes, it is appropriate to exclude the killing of animals taking place during those events from the scope of this Regulation.

As it turns out, the societal bill for securing animal rights is to be paid by Jews and Muslims—and them alone. That’s because according to the court, requiring stunning in non-Jewish and non-Muslim settings would “adversely affect the very nature of the event concerned.” (Apparently, this is not an issue for Jewish and Muslim affairs.) Likewise, centuries worth of Muslim and Jewish tradition do not qualify as exempted “cultural traditions” that “contribute to fostering long-standing social links between generations.” That privileged carve-out is reserved for the rest of Europe’s citizens. In other words: Bullfighting in, Rosh Hashana brisket out.

Surveying these ludicrous legal gymnastics, one Jewish critic wryly mused: “Perhaps the solution is for Belgian Jews to turn ritual slaughter into a sport, where teams of shochtim [butchers] compete to see which one can slaughter the most animals in an hour and families can cheer them on. After all, killing animals is fine for recreational purposes, right?”

But the truth is, bans like Belgium’s are no laughing matter, and are representative of something far more insidious: a socially acceptable sanction for bigotry.

Everyone understands that skinheads marching under fascist banners or terrorists who shoot up Jewish institutions want to make Europe unlivable for its remaining Jewish inhabitants. But those who seek to outlaw basic Jewish and Muslim religious practices—ritual slaughter, but also infant male circumcision (contrary to the global health consensus)—are doing the same thing. They just dress up their exclusionary ideology in the language of righteousness to make it acceptable in polite company.

No one should fall for it. Such efforts should be anathema not just when they come from the unwashed masses, but when they are part of an elite-driven campaign and presented as high ethical culture. After all, European anti-Semitism has always constructed itself as morally superior to the benighted practices of the Jews it persecutes. That doesn’t make it any better, it just makes it dangerous.

Fortunately, Europe is not yet on board with this unfolding plan to repress Jewish and Muslim religious life. Most states don’t have bans on kosher and halal slaughter, and most likely don’t want one. In advance of last week’s ruling, the European Union’s own advocate general advised the court to reject the Belgian restrictions as a violation of EU law and its commitment to religious freedom. But the court’s decision to disregard this guidance and uphold the Belgian bans has set a troubling precedent that could supercharge similar efforts across the continent.

It’s up to people and countries who care about Jewish and Muslim rights to speak out and deter other regions of Europe from following suit.

Last week, the U.S. Senate voted to upgrade the position of the U.S. special envoy to monitor and combat anti-Semitism to the level of ambassador, giving the office extra funding and authority. Sadly, both will be needed. Sooner rather than later, President Biden should appoint someone to fill the position, and when he does, it will fall upon them to pressure European countries into protecting the rights of their religious minorities.

Whoever assumes the post, they should be crystal clear about one thing: Bans of centuries-old Jewish and Muslim practices are anti-Jewish and anti-Islamic. Undoubtedly, many Europeans who push these policies genuinely believe that they are morally right to do so and that traditional Judaism and Islam are morally wrong. That is their right, but they do not get to pretend that they are not being anti-Jewish or anti-Muslim while making such claims. When you seek to outlaw the fundamental observances of a religion and declare that it is backwards, you do not get to present yourself as a defender of that faith or of religious freedom—or else words have no meaning.

Many Europeans over the centuries have insisted that their cultural practices were morally superior to Jewish ones, and to put it mildly, none of those people are looked upon favorably today. Perhaps our contemporary crusaders will be the first to turn out to be the heroes of this story, and not just the latest in a long line of anti-Jewish actors who’ve convinced themselves that they’re serving humanity by suppressing Judaism.

But would you bet on it?