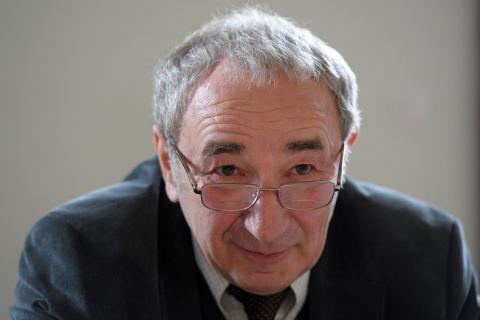 Arseny Roginsky, founder of Memorial, was the embodiment of freedom. While Soviet authorities considered him to be anti-Soviet, he could best be described as, simply, not Soviet at all. Roginsky was a patriot of his country; his main goal being the protection of Russian history from the state’s attempts to obliterate its crimes.

Arseny Borisovich Roginsky passed away on the morning of December 18. Among his many distinctions, Roginsky managed to be a political prisoner, a defender of human rights, a historian, a philosopher, a disciple of the literary scholar Yury Lotman, and chief curator of the historical archives on Stalin’s repressions. In recent years, he was most prominently a founder and the head of the historical and civil rights society Memorial—and, by association, also labeled by the Russian government as a “foreign agent.”

At a conference last year, Roginsky noted, “Russian prisoners have a saying: ‘We don’t really care what the guards have to say about us here…’ but within the camp, there are only so many people. When the entire country labels you as a foreign agent, in other words a spy, it is a monstrous insult.”

Even within an impressive generation, Roginsky was incomparably honorable and charismatic. His entire life was spent resisting injustice. In the early 1980s, Roginsky was given the option to flee the country following accusations of his role in publishing anti-Soviet journals. Instead, he declined the offer and took on four more years of prison. During his trial, Roginsky delivered a closing statement titled “The Situation of a Historian in the Soviet Union,” which discussed the importance of historical archives in Russia. After serving his sentence in full, he was finally released in 1985. He spent the remainder of his life working on the archives of millions of Soviet citizens.

Among them, Roginsky found the case of my own grandfather. Together, we explored the details of my grandfather’s modest Soviet life as an architect and his death in 1946 in a labor camp—the same camp that Roginsky would find himself imprisoned at years later. Arseny Borisovich knew which archives to consult before even requesting them. This was just one example of how he fought against the state. He was always a few steps ahead of his opponents and enemies. Nevertheless, when necessary, he cooperated with the government. Earlier this year, Arseny Borisovich became a leading voice of support for the “Wall of Sorrow” monument in Moscow, dedicated to the victims of political repression. It was one of his final victories.

Today, the Russian state desperately struggles to achieve historical amnesia. The government wishes to obscure its shameful history and turn the highlights into postcards and comics. Roginsky belonged to a special category of people whom, in his own words, the authorities could always either “blame or forgive” for their actions. After the collapse of the Soviet Union, the government took a short break from this strategy. Recently, it relaunched its attacks, but Roginsky continued resisting.

With a pack of “Parliament Night Blue” cigarettes in the Memorial courtyard, Roginsky would often reflect on how to best defend his organization or preserve the “collective memory” of state repression. The dissident compilations that he was imprisoned for were entitled “Memory”—and Arseny Borisovich preserved these memories with relentless consistency, bit by bit, one human life at a time.

Roginsky was a proponent of the “invisible hand” of the market—in this case, Stalin being an overbearing force that would define Russia’s trajectory for decades. His intimate understanding of Joseph Stalin—the man, the myth, and eventually the brand—spanned across Russia’s past and present. Roginsky would argue, “Take Stalin out of our lives and the thievery and disorder will disappear.” Some might say that his solution was a gross simplification. But maybe, after failed attempts to do this in the eras of Nikita Khrushchev and Mikhail Gorbachev, Russia should try again. If implemented correctly, perhaps Roginsky was indeed correct.

While Soviet authorities considered Arseny Borisovich to be anti-Soviet, he could be best described as simply not Soviet at all. Roginsky was the embodiment of freedom. He was a patriot of his country. His main goal was the protection of Russian history from the state’s attempts to obliterate its crimes by any means necessary.

Even in his late years, Arseny Borisovich’s chain-smoking and late-night coffee-drinking could be seen as principled preservations of personal liberties. During the 1980s, in solitary confinement, he smuggled a pack of “Prima” cigarettes, matches, and chifir (a concentrated tea often brewed in Russian prisons) through a hole in the wall. The government was not going to stop him from smoking.

About a month ago, from the apartment of his close friends Lena Nemirovskaya and Yury Senokosov, I spoke with Arseny Borisovich over the phone. Despite suffering from a serious illness, his voice had not changed. In his distinctive tone, his musings were ever more familiar—simultaneously ironic and serious. He expressed the desire to meet in Moscow. His parting words resembled a line from his speech at 1981 trial: “Please don’t worry about me. Soon we will write each other letters. And time will fly by…”

Indeed, my dear Arseny Borisovich, time flies by quite fast.