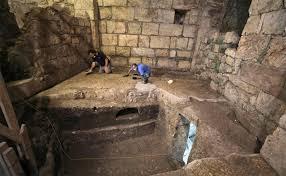 Two thousand years ago, Jerusalem residents were storing food and water, cooking, maybe even living in a unique subterranean multiple-room structure barely 30 meters from the holy Temple. This new discovery was unveiled by the Israel Antiquities Authority (IAA) and the Western Wall Heritage Foundation on Tuesday ahead of Jerusalem Day.

Descending into the underground chambers from the Western Wall Plaza – glaring with light and still under the coronavirus regulations and a heat wave – is nothing less than a journey back in time before Jerusalem was destroyed by the Romans, when the city was still bustling with Jewish life and rituals.

“At the time of the Second Temple, 2,000 years ago, this was a public area, the civic center of ancient Jerusalem,” Dr. Barak Monnickendam-Givon, co-director of the excavation on behalf of the IAA together with Tehila Sadiel, told The Jerusalem Post. “We think that the public street passed just a few meters from here, and we are standing next to what we archaeologists call the ‘big bridge’ that connected the upper city to the Temple itself.”

The complex features two rooms connected by a staircase and an open courtyard. The entrance presents clear signs of the presence of door hinges and bolts, while the walls offer several niches for oil lamps as well as carved-in shelves. The structure was discovered under the white mosaic floor of a monumental Byzantine building from about 1,400 years ago.

The large hollow space where both the building and the more ancient chambers stand has walls erected in the typical Jerusalem stones of different sizes, blackened by the centuries, pieces of Roman columns and floors built in a variety of materials and at different levels. The excavations are ongoing.

In a corner, an IAA conservator was working on preserving the Byzantine mosaic, while a few meters away two archaeologists were sifting through some dirt to make sure it did not contain other artifacts or shards. Clay cooking vessels, oil lamps and stone containers, useful to store water and minimizing the risk of giving it ritual impurity according to Halacha, are among the objects retrieved by the researchers so far, allowing them to assess that the carved structure was in use in the first century CE. How much earlier it was actually built remains a mystery, one of the many that will be addressed as the studies proceed.

Several features make the discovery unique, Monnickendam-Givon said, adding that very few structures from that period survive in the city. “After the Roman siege and destruction in the year 70 CE, Jerusalem was burned and devastated, and all the Jewish people were exiled,” he said. “A few decades later, the Romans started rebuilding it from scratch.”

Moreover, usually structures in that period were built in stone, while those who hewed the rooms underground chose to carve them out of the hard bedrock, which required a considerable effort. “Besides from burials, we have rarely found any complete rock-cut rooms from that era,” he said. “Most people in ancient Jerusalem lived in stone-built houses. What was the function of this hewn system just under the street level? Was it a house, a storage unit? Something else?”

Penetrating the secrets of the site will require another 20 or 30 years of excavations, Monnickendam-Givon said. One of the goals is to connect it with the area where the main street passed. Even the purpose of the Byzantine building whose floor protected the ancient rooms for so many centuries is still shrouded in mystery. “We do not know whether it was a religious or a civil building,” IAA archaeologist Michael Chernin told the Post. “We do know it collapsed during an earthquake at the beginning of the 11th century.”

The area was abandoned in the Crusader period and was settled again in the Mamluk period (13th-16th century), he said. The researchers uncovered artifacts from these different times, including bone tools, clay vessels, a strainer and a candle holder. “We want to understand the function of these structures, as well as their connection with the topography of the Roman and Byzantine Jerusalem,” Chernin said. “It is possible that more subterranean rooms will also emerge.”

Western Wall Heritage Foundation director Mordechai “Suli” Eliav said in a press release: “I am excited, on the eve of Jerusalem Day, to reveal to the Jewish nation a new treasure trove of impressive and fascinating findings that shed light on life in Jerusalem throughout the generations in general and on the eve of the destruction in particular. “This finding epitomizes the deep connection of Jews with Jerusalem, their capital. Even when there were physical limitations, prayer at the foot of the remnant of our Temple never ceased, and this is tangible evidence of this.”