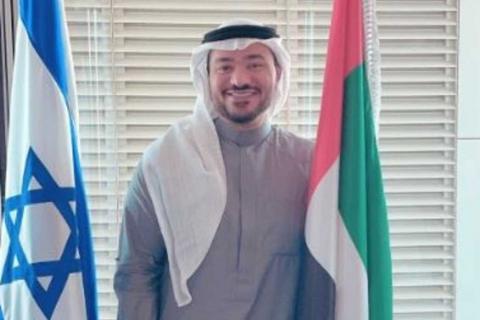 “The Golan Heights is the only area in Syria that hasn’t been destroyed and had its people killed.” With these words, a Syrian blogger began a video begging the Israeli government to “occupy” the entire country of Syria to save more lives. In another video, an Arab academic dressed in a long white kandura is moved to tears by visiting Yad Vashem, promising: “Today, together, Muslims Jews and Christians, we promise you, it will never happen again.”

The huge growth of social media has in recent years allowed the world to see a different Middle East — one where individuals have been able to directly communicate their honest views on Jews and Israel to the world. But in 2020, something changed again. The signing of the Abraham Accords in September that year was a watershed moment: it allowed many Arabs to speak out openly about Israel without fear of a backlash — while opening the door to positive experiences of Israel, whether via the news or trips to the Jewish state.

Now, in a growing trend, pioneering Arab Zionists and pro-Israel influencers — who once would have been labelled traitors — are promoting Israel to their hundreds and thousands of followers. Loay Al-Shareef, 39, is an Abu Dhabi-based social-media influencer and a self-declared Zionist. He has 180,000 followers on Twitter, and more than 80,000 on Instagram, thanks largely to his regular posts about languages and etymology.

Originally from Jeddah in Saudi Arabia, he studied software engineering in America, and in 2010 spent some time living with a Jewish family in Paris, learning French. “That was the real life-changing point for me with the Jewish people, because I got to know the Jews more closely,” he said.

Thus began his mission to investigate biblical history, archaeology and the history of the Near East and Mesopotamia, all of which led him to believe in the legitimacy of the state of Israel. “It’s very righteous for the Jews to have their ancestral homeland in the land of Israel,” he said.

He peppers his conversation with frequent references to Jewish scripture, saying he came to the conclusion that “Jews are not colonialists or conquerors in the land of Israel, because if we would believe that then we would believe that David, Solomon, Isaiah and Yirmiyahu and the prophets were actually colonisers, and that would kill the Islamic faith.”

Like Mr Al-Shareef, Fatema Al-Harbi, 30, is an online influencer, though she is based in Bahrain. She has spent time abroad and credits having studied in Australia for giving her experience of different cultures and people. “My family is very open-minded. I’ve always been surrounded by people from different religions,” she said.

She worked for seven years in Bahrain’s Ministry of Education and then studied for a second Masters degree in Human Resources, while also working as a writer. Ms Al-Harbi was very excited when the Abraham Accords were signed, describing the historic deal as “something impossible being possible”.

Sharing her enthusiasm on Twitter and Instagram, she was soon invited to visit Israel by online friends she had made there. She accepted immediately. She said: “Who wouldn’t want to know the unknown? It’s something unknown for us people in the Arab region.”

Arriving in Israel just two months later, Ms Al-Harbi became the first non-government Bahraini to visit. “To be honest, I was a bit afraid,” she said. “Family and friends around me were like, ‘Oh, my God, are you seriously going to Israel?’, because they all hear about it through the media in the Arab world, and it’s all bad stuff.”

Unlike Ms Al-Harbi, Mr Al-Shareef has never visited Israel, but still declares himself a proud Zionist. He started posting pro-Israel content to his social-media accounts in 2018, two years before the Abraham Accords were signed, and found they were not well received. “I paid a great price,” he said, referring to the negative reaction he received from some. But once the normalisation agreements were signed, he actually gained extra followers online. “Baruch Hashem, so many people came on board,” he said.

After Ms Al-Harbi’s first trip to Israel in October 2020, she also received negative attention, including death threats. On returning to Bahrain, she found she had achieved notoriety as “the girl who went to Israel”.

But that didn’t dissuade her from visiting Israel again, in October 2021. Over the intervening 12 months, things had improved and most responses were positive. “Some people actually approached me asking, ‘How can we go and visit Israel?’ So a lot has changed in just one year.”

Trips like those taken by Ms Al-Harbi have mostly been organised by newly established NGOs working to foster warm relations between Israel and its Abraham Accords partners at civil society level. Hers, organised by the NGO Sharaka, helped her overcome preconceived ideas about Israelis.

“As soon as I landed there, we got to the hotel and I saw how friendly the people were. Arabs, Muslims, Jewish people, all from different backgrounds. They were even more happy than we were that we’d come. “We wore our traditional clothes, so it was easy to spot us in the streets of Israel. People we didn’t know at all kept approaching us, asking, ‘Are you from Bahrain or Dubai?’ They kept saying, ‘Welcome to Israel!’”

These trips can also have a much broader effect, challenging wider antisemitism and even educating participants about the Holocaust. Ms Al-Harbi remembers a transformational visit to Yad Vashem.

She said: “For us in an Arab country, we only know the minimum about the Holocaust. ‘I’m a writer and I like to read, so I know a bit more than most people in Bahrain, but they don’t speak about it and they don’t teach us about it.”

Learning about the Shoah for the first time proved to be emotional for her group. “My friends actually were crying on the tour. The first thing I did was share the whole experience with my followers through Instagram and Twitter. “I have around 9,000 followers on Instagram, so I shared the experience with them. “I wanted them to know what I learned that day, because people in our countries don’t know.”

Indeed, the most effective online content shared by pro-Israel Arabs is often cultural or historical, rather than political. “I don’t engage in politics, right or left, Likud or Kahol Lavan,” Mr Al-Shareef said. He started by writing about biblical history. “I was trying to educate my audience more about the Hebrew language, and more about the ancient existence of the Jews in this region, that the Jews are part of this region,” he added.

Arab support for Israel has often wavered because of loyalty to the Palestinian cause. But even that has changed since the Accords. “We’ve given them lots of money that could turn Gaza into a Silicon Valley,” Mr Al-Shareef said. “Enough money that would turn the West Bank into a new Singapore. Where is this money going?” he asked.

Looking to the future, both Mr Al-Shareef and Ms Al-Harbi are optimistic. He feels certain that Saudi Arabia, where he was born, will eventually also normalise relations with Israel: “This is the real direction that everyone is going in. More peace, lowering tensions, no more wars.”

Dan Feferman, Global Affairs Director at Sharaka and a founding member of the UAE-Israel Business Council, said: “For most of their lives, people from the Gulf have been taught that Israelis are the bad guys, the occupiers. But they meet us abroad and we seem like normal, nice people. They hear about the tech, the Nobel prizes, the academia, and something doesn’t make sense. Now they have government support to do so, they’re interested in getting to know Israelis themselves.”

Positive feeling towards Israel among Arab countries is not necessarily new, but open expression of those feelings is becoming more commonplace. Middle East commentator Tom Gross has witnessed this first hand. He said: “For years I’ve been attending clandestine and not so clandestine meetings with Israelis, Europeans and people from almost every Arab country.

“The goodwill has always been there. I’ve witnessed far more hostility towards Israel among leftists in London and Paris and by some European-born Muslims, than people I have got to know who actually live in Bahrain, Saudi Arabia, Yemen and Iraq.”

For now, pro-Israel Arab voices are still notable for their rarity. But where innovators venture, others often follow. Even with a change in leadership in America and Israel since the Accords were signed, relations have remained firm.

Consequently, a new wave of warmth towards Israel is sweeping across the internet from the Middle East like a pro-Zionist Gulf Stream.