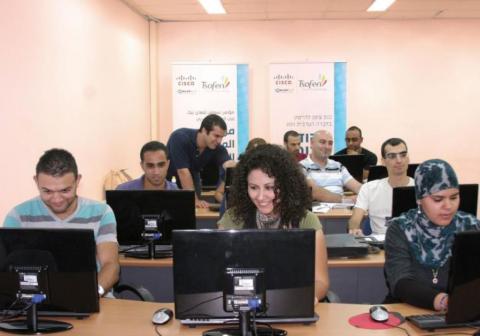 Israel’s high-tech sector is a resounding success story and a major engine of the economy, employing about eight to nine percent of the working age population in some of the most high-salaried positions in the Startup Nation. But the booming industry is headed for some trouble, with the Israel Innovation Authority warning last year that the sector would soon suffer from a workforce shortage.

One of the proposed solutions, among several, was to work on integrating members of Israel’s Arab community, which makes up about 20 percent of the general population, into the high-tech industry from which it has been largely absent.

A new report published last month by the Inter-Agency Task Force on Israeli Arab Issues, led by a coalition of Jewish-American organizations which looks at Arab citizens’ integration into Israeli hi-tech, suggests that the work is already underway.

According to the report, there has been a noted increase over the past decade in the number of Arab high-tech engineers and computer scientists working in the industry, from roughly 350 in 2008, a fraction of the one percent of the skilled high-tech workforce, to an estimated 5,000, or four percent of skilled workers, in 2018.

As of 2008, a combination of civil society, government, and private sector initiatives have contributed to a rise in the percentage of Arab students in tech fields, a growth in the number of Arab-led startups in various stages of development, and a decrease in the economic gap, the task force reports.

While the rate of integration is still relatively small, and very much a work in progress, various organizations such as non-profit Startup Nation Central and the Israel Innovation Authority, the Israeli government’s support arm for local innovation and R&D, have stepped up to help, launching initiatives meant to increase targeted support to the community. These include various coding boot camps to train software developers hoping to enter the workforce,  and funding local startups and businesses that train diversified populations.

Subsectors such as the Inter-Agency Task Force on Israeli Arab Issues and the Israel Innovation’s Authority Head of Societal Challenges were created to help narrow these economic and societal gaps.

Naomi Krieger-Carmy, the former director of the UK Israel Tech Hub once helping to build partnerships between British and Israeli companies and  now the Head of Societal Challenges Division at the Israel Innovation Authority, tells NoCamels that one of the things they look at in her division is how the IIA “can harness technological innovation to solve what we call ‘societal challenges.'”

With the aim to increase participation in Israel’s booming startup scene, the Israel Innovation Authority has announced the expansion of support for minority populations looking to break into tech, including the ultra-Orthodox community, the Arab community, women, citizens over 45, Ethiopian immigrants, and people with disabilities. In July, the authority announced it will expand its support for ultra-Orthodox tech entrepreneurs, with startups now being eligible for grants of NIS 2.5 million ($682,000) in the first year and up to NIS 4.5 million in the second year.

Similarly, the IIA now has an annual budget dedicated to supporting Arab tech entrepreneurs and their companies, if at least 33 percent of the company’s shares are owned by a founder from an Arab community.

The idea is to pursue “impact investing”  – a  chance to invest in things that, besides a financial return, also creates a positive social or public impact, Krieger-Carmy says. “We’re bringing that approach and trying to help develop the field here in Israel by creating unique support tracks for entrepreneurs and companies in those areas,” she explains. For the IIA, impact investing means supplying funding to companies “who might have a tougher business challenge to crack.”

Krieger-Carmy, who says the IIA has an annual budget of NIS 1.6 billion (about $448 million) a year, explains that companies can apply for funding and submit detailed requests based on R&D projects. “When we do fund a project, it’s always some percentage of it. We’re always looking for the company to raise matching funds on their own,” she explains.

The authority has made efforts to expose the Arab population to the prominent high-tech sector in Israel, introduce Arab entrepreneurs to the other potential up-and-coming Arab engineers, programmers, and entrepreneurs looking to start their own tech business, and provide what Krieger-Carmy calls “operational support” where Arab-run companies can apply for funding based on a project.

The panel, which included Nada Shalabi, co-founder and VP of R&D at AI-powered health platform Wikaya, Rami Younes, co-founder and CEO of secured IoT platform MindoLife, and Tarek Issa, founder and CEO of collaborative music app Lofic, even walked interested audience members through the step-by-step process of filling out the IIA’s detailed, R&D project-based request for funding. This involved how to persuasively write your company’s business plan and why funding from the IIA is just as effective as funding from a VC, Issa told NoCamels.

MindoLife’s Younes and Lofic’s Issa said in separate phone interviews with NoCamels that it would have been difficult for their companies to survive without the financial support from the authority.

“The IIA is doing what VCs are afraid of — they invest in early ideas and early-stage startups,” Issa says. “They take companies that might be too risky to invest in and believe in them. This is something that is missing in our communities.” “In my opinion, this is the main reason why the number of Arab/Haredi [ultra-Orthodox] entrepreneurs are increasing,” he adds.

The IIA invested in Issa’s company in August 2016, and he believes it’s partly because it “was not something you’ve seen in Israel before.”

The app, which allows users to create collaborative musical productions via smartphone, has exactly what the IIA wants:  a solid business plan and unique tech innovation,  as it seeks to connect musicians and enhance the quality of their recordings through an algorithm. It also uses artificial intelligence to pick up sound quality and enhance it to make better music.

While the company is mixed, with a team of developers and managers that include Arabs, Jews, and foreigners, Issa says Lofic couldn’t have come as far without the much-needed financial aid from the IIA, which was provided, in part, because its founder is a member of the Arab community.

“They brought me to this point that I can now go to VCs and say, ‘I already have this. I have a strong proof of concept.’ They believed in me, in my team, in the product itself,” he explains.

Lofic was recently accepted into Coca-Cola’s six-month commercialization program, The Bridge, in Tel Aviv, and the team is preparing to raise a $2 million round of financing to further development. The firm is currently negotiating with two venture capitalists, he says.

MindoLife developed an optimized IoT platform called CyberThings which can help device manufacturers connect their IoT devices to the network safely and securely. “We are a special company,” Younes says of co-founding team, “We were self-funded until the Israel Innovation Authority came along — then, it was [known as] the Office of Chief Scientist. We ended up getting $1 million from two different sides — the Office of Chief Scientist and our first customer. But without the OCS, we wouldn’t have made it.”

Today, the company employs 10 engineers and is looking to open its first US office. “Usually others go to VCs, but there are programs to enter the US market with help from the OCS,” he says. “It’s been a hard journey,” he says of building the success of the company over the course of four years. “I told the audience [at the event in Haifa] that a startup might seem easy to build, but it’s actually really difficult with a low possibility of success.”

The Israel Innovation Authority is looking to become a strong resource for Arab Israeli entrepreneurs to help them overcome the broad cultural and financial challenges that come with starting a business or integrate into Israel’s high-tech sector.

But it’s also about expanding human capital. As multinationals swoop in and nab local talent, whether it’s to set up shop in Israel or abroad, the pool of trained R&D employees in Israel just isn’t growing fast enough.

This initiative, as NoCamels reported at the time, was founded to create an alternative route for joining the hi-tech workforce in a maximum 12-month program aimed at college graduates in the sciences who are interested in a career shift to computer programming. With an annual budget of $2.8 million, it aims to train 2,000 software developers to join the workforce within the next five years.

In June, seven companies were chosen to offer the training.

Start-Up Nation Central, meanwhile, announced in August that it will launch its first coding boot camp for Arab community members and ultra-Orthodox women in Jerusalem in October 2018. This boot camp will target people with a degree in computer science and will include full tuition and scholarships toward living expenses in the first years of the program. The first boot camp will include 20 Arabs and 20 ultra-Orthodox women with a goal of 12 cycles in three years, to produce a minimum of 240 Arab graduates.

Coding boot camps, a popular way to train future programmers, first appeared in the United States in 2012, according to the Israel Innovation Authority. These boot camps currently provide about a quarter of the people employed in programming positions every year.