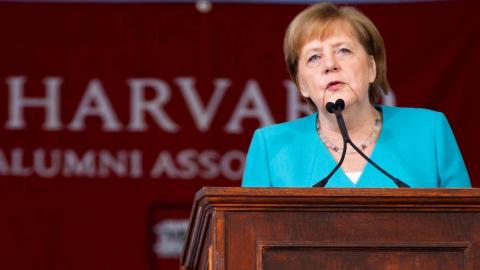 German Chancellor Angela Merkel told graduates of Harvard University they must "tear down walls of ignorance" and reject isolationism as they tackle global problems such as climate change and terrorism. Merkel made the comments Thursday while delivering the keynote speech at Harvard's 368th commencement ceremony in Cambridge, Massachusetts. Mostly speaking in German through an English interpreter, Merkel called for greater international collaboration and echoed her past criticisms of U.S. President Donald Trump without directly naming him.

Addressing graduates and their families, Merkel decried the rise of "isolationism" and "protectionism." She said those forces have undermined global trade, which she called "the very foundations of our prosperity." "More than ever, our way of thinking and our actions have to be multilateral rather than unilateral. Global rather than national. Outward-looking rather than isolationist. In short, we have to work together rather than alone," she said. "You, dear graduates, will have a quite different opportunity to do this in the future than my generation did."

Much of her speech reflected on her time growing up in East Germany, behind the Berlin Wall and under oppression by the Soviets. Merkel recalled the freedom she was granted when the wall fell in 1989, inspiring her to pursue politics and leave her career as a research scientist. Today, she said, many threats come not from physical walls but from abstract barriers. She cautioned against "walls in people's minds" that can prevent leaders from working together on global challenges.

"Walls of ignorance and narrowmindedness may exist between family members as well as between groups within society, between people of different skin colors, nations and religions," she said. "I would like to see us break down these walls."

Merkel has spoken out against the rise of racism and nationalism in her country, saying Germany has to be more vigilant in responding to those movements because of the country's Nazi past. She referenced that history at Harvard, saying Germany brought "unimaginable suffering on Europe and the world" during World War II. But she also focused on the "peaceful order" that world leaders achieved by uniting in the aftermath.

"I firmly believe that we Europeans have united for the better," she said. "The relationship between Germans and Americans too demonstrates how former wartime enemies can become friends."

Merkel did not meet with Trump during her U.S. visit but is scheduled to meet with Secretary of State Mike Pompeo in Berlin on Friday. Her speech never directly referenced Trump but appeared to include several veiled digs at the president, who has had a frosty relationship with Merkel.

The chancellor spoke about the importance of truthfulness, saying leaders should not "describe lies as truth and truth as lies." She said problems can be solved "if we don't always act on our first impulses, even when there is pressure to make a snap decision, but instead take a moment to stop, be still, think, pause. Granted, that certainly takes courage." The comment drew cheers from the audience, which applauded frequently though her speech. Merkel drew another wave of applause when she referenced her nation's goal to reach carbon neutrality by 2050.

Elected in 2005 as Germany's first female chancellor, Merkel is serving her fourth term, which runs through 2021 and which she says will be her last. In a separate ceremony Thursday, Harvard awarded her an honorary Doctor of Laws degree. While conferring the degree, Harvard President Larry Bacow said of her, "a wall came down and she rose up, leading her nation with strength and savvy, and guiding Europe through challenge and change."

While speaking to graduates, Merkel described a passing of the torch from one era of leaders to the next. She said her generation would soon be doing nothing more than "exercising leadership in history," while today's college graduates lead into the future.

"I want to leave this wish with you: Tear down walls of ignorance and narrowmindedness, for nothing has to stay as it is," she said.

As for what's next in her career, Merkel said it's "completely open." ''Only one thing is clear," she said, "it will again be something different and something new."