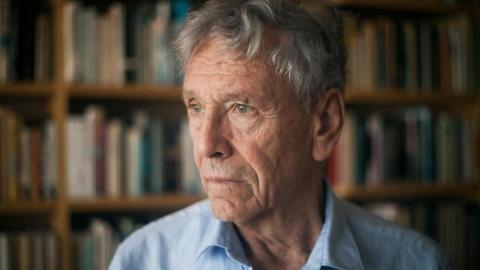 Amos Oz was a teacher to me, a friend. About once a month I would travel early in the morning from my house just outside of Jerusalem to his house in Ramat Aviv. He would make me “the best coffee in town” according to him, and we would sit and chat.

I didn’t gain his trust easily. In our first meetings he would sit in an armchair across from me, but his body and face were turned away. In those meetings he would listen very little and speak a lot. He basically lectured. But with each subsequent meeting he turned himself in his chair a few centimetres in my direction. With each meeting he lectured less and instead spoke – and listened – more and more. And when he finally sat with his face fully towards me, I knew he had begun to trust me.

He had a greatness about him, a nobility. Even towards those who attacked him. It was a nobility that was a bit anachronistic, as if from the 19th century. It wasn’t easy for him, being Amos Oz. It wasn’t easy for him to be the person who so many people project so much on to: their deepest desires, their hopes and disappointments, everything that is tangled and unresolved within them.

I think of Amos the writer, and about Amos the spokesperson, and about what was in his writing that so succeeded in raising his readers; to stir them up, to shake them and to wake them.

I think about his fictionalised characters, but also about the real people he met and documented. For example, in his wandering around Israel in autumn 1982, the journey that gave birth to one of his best books, In the Land of Israel. When we read this narrative, the same thing happens to us that happened to countless readers of A Tale of Love and Darkness: we feel that we are touching some elusive secret that is found in the foundation of the Israeli existence.

It’s hard to define this secret in words: a type of vibration that is unending, spiritual, conscious. A vibration of an age-old memory and of unbearably hard traumas that still have not been digested or truly understood. A feeling of deep, existential insecurity that exists together with a sort of excessive self-satisfaction and hasty self-confidence. More than anything, I think, it is the vibration of a terrible pain, thousands of years old, that has no comfort. The hurt of a persecuted and hated nation that was almost annihilated. How turbulent it is to read all of this in a book. And how hard it is to live it.

In each of his books, Amos expressed an ethical, political and clearly human stance, and we, the readers, travelled with him throughout the process. We experienced a wide net of emotions and thoughts, impulses and desires catching even our own soul’s abominations, those that we know are distortions and deficiencies that have “run in the family” for generations.

Thanks to Amos and his unrivalled skill, we have faced them, have been burned by them, have perhaps even been tempted by them. We have also felt the misgivings of that which documents them. Sometimes we would also distance ourselves from him: sometimes he himself seemed like a character from one of his books, the same virtuous, reasonable rationalist who frustrated, and sometimes infuriated, us. Because of his powerlessness and his inability to better our complicated and nightmarish existence.

He said to me once: “I hated my father in my youth, because I thought it was he who caused my mother to kill herself. And then I hated my mother, because how could she do something like that to me? How could she leave the house without saying where she was going? She was the one who demanded from each of us, whenever we left the house, to leave a note underneath the vase saying exactly where we were going …

“And mostly I hated myself,” said Amos, “because if my mother killed herself, I must not have been lovable enough for her. How could it be? Even the mothers of Nazis loved their sons, and my mother didn’t?

‘The world is diminished by the death of Amos Oz, it has narrowed down’

“And only when I had my own children,” said Amos, “did I begin to have compassion for my parents, and to love them. Only then was I able to understand them. And when I wrote A Tale of Love and Darkness I actually was a bit a ‘parent of my parents’.”

For our last meeting, about a month before his passing, he asked me to bring my wife, Michal. And that meeting was distinct from the ones before it. Amos was at his peak – entertaining, witty, ironic, brilliant. He mostly did not speak about his illness, which at that point was already critical. He just said: “The architect of the body was a genius, but the contractor skimped on the materials.” Michal and I laughed, but Amos apparently saw my expression and said: “Don’t pity me. I have had a very good life. Much better than I ever could have imagined. I have loving children, I have Nili, my beloved wife. My books are read around the world. I received so much more than one can ask from life.”