Americans see religion in decline yet want more of it. What's up with that? 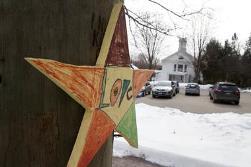 A star with the word 'Love' hangs on a telephone pole in front of the United Methodist Church in Newtown, Connecticut, last February. The church is helping the community heal after a gunman killed 20 children and six adults in the local elementary school in December 2012. The church was open for prayer after the shooting and the congregation brought meals and comfort to those affected.
Photo by Melanie Stetson Freeman/The Christian Science Monitor

In many professional fields, from neuroscience to evolutionary biology, it’s popular today to build entire careers on the study of religion. Where does faith come from? What does it achieve? Why is it so prevalent? And so on. Perhaps the most extended research, however, comes from the Gallup poll. Since 1957, Gallup has asked Americans this simple question: Is religion increasing its influence? The poll is not a measure of religious or spiritual beliefs but rather a perception of religion’s role in society. The latest poll, released Wednesday, shows the most negative public opinion toward the impact of religion since 1970.

The last time a majority of Americans saw religion as increasing in influence was just after the 9/11 attacks. Today, in sharp contrast, 77 percent believe it is losing influence. That’s about the same percentage as during the late 1960s.

“In 1969 and 1970, with the Vietnam War raging in controversial fashion and with the cultural and sexual revolutions underway, and to a lesser degree at times in the 1990s, Americans held negative views similar to those they hold today,” wrote Gallup editor in chief Frank Newport in an analysis of the poll. “The degree to which these views changed during the Reagan years, and after 9/11, suggest that they could change again in the years ahead.”

This year’s poll also asked if society would be better if more Americans were religious. More than three-quarters said yes. Even a majority of those with little or no religious affiliation agreed. This suggests most people look to religion as a necessity during times of social change. Religion, in other words, may appear to gain respect to more people because it offers a comforting role or makes a case for personal sacrifice. Many people, either the faithful or those who are not, see it as both defining goodness and demonstrating it.

Another poll, done for the Christian group LifeWay Research, also finds Americans more open to religion during time of tragedy. Nearly 6 in 10 agree with the poll’s statement, “When a natural disaster occurs, my interest in God increases.”

It is difficult to reconcile these polls with a rising disinterest in institutional religion. A Pew poll last year found 15 percent of American adults say they have no religious affiliation (the “nones,” as they are dubbed). That is about double from four decades ago.

These numbers, however, probably reflect a growing distrust in almost all institutions, not just established denominations, as well as a rising interest in individual spirituality more than group worship or faith-impelled social action.

“When we put it all together,” says Mr. Newport, “we get the image of a basically religious American population whose underlying religiousness has not changed a lot in recent decades.” As more researchers are finding out, when people search for an understanding of God, they are more honest, generous, and loving. They try to be less controlled by appetites. And society benefits.