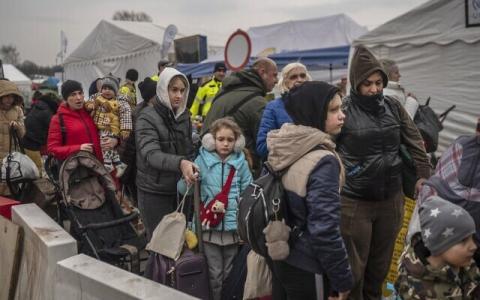 As the ongoing Russian invasion of Ukraine passes the six-month mark and rockets continue to fall on Ukrainian cities, Jews in the United States — many of whom have roots in Ukraine — are stepping up their support of the war’s refugees. For many, however, it’s also proved a way of karmically paying back long-gone Ukrainians who once aided their own Holocaust survivor ancestors.

Psychologist Debbie Pincus-Ward recently welcomed a 32-year-old Ukrainian mother and her son into her home outside of New York City, rescuing them from the rodent-infested basement of a church where they had been sleeping. The pair stayed in Pincus-Ward’s attic bedroom for five weeks, sharing her kitchen and communicating with the help of Google Translate.

“A lot of people asked why,” Pincus-Ward said. “Maybe it was knowing my grandparents’ journey from Poland and Russia and being refugees themselves and imagining what it would be like for them.”

Across America, synagogues are sponsoring families from Ukraine to come to the US, while Jewish Family Service agencies are helping Ukrainians find housing, apply for work authorization, and sign up for English classes. Jewish volunteers are driving Ukrainians to doctors’ appointments and Ukrainian refugees are being put up in Jews’ homes.

This month, the Jewish Federations of North America (JFNA) announced a $1 million grant with matching funds from the Shapiro Foundation and the Combined Jewish Philanthropies, Boston’s Jewish Federation, to help resettle displaced Ukrainians in the United States. And, according to an August 24 report, the JFNA has raised $73.5 million for an emergency fund to provide relief for Ukrainian refugees in Ukraine and neighboring countries, as well as helped nearly 81,000 people escape from danger zones.

This represents just a fraction of the aid coming from Jewish organizations to help a nation with which Jews have a long and complex history. But for many involved, the support has been rewarding to both benefactor and beneficiary.

Pincus-Ward was made aware of the mother and son’s plight thanks to the Westchester Jewish Coalition for Immigration, which is currently assisting five Ukrainian families.

Coalition president Holly Rosen Fink said that it feels almost ironic that a Ukrainian family found shelter in the attic of a Jewish home. While during the Holocaust many Ukrainian families hid Jews, in a reversal of roles, a Jewish family is now harboring Ukrainians, she said.

Jews have lived in Ukraine for more than 1,000 years — through periods of tranquility and strife. Jewish life in the country was nearly eradicated during the Holocaust when the Nazis murdered approximately 1 million Jews there with the assistance of local collaborators.

While many Ukrainians risked their lives to help their Jewish neighbors, others worked as guards in Nazi death camps and were involved in mass shootings of Jews.

During the Russian civil war a century ago, at least 50,000 Jews were murdered in Ukraine in widespread pogroms; some put that number as high as 300,000. The commander of the Ukrainian army and subsequent president of the Ukrainian People’s Republic, Symon Petliura, who didn’t prevent the violence against Jews, was later assassinated by a Jewish Communist in revenge for the killings.

Far from harboring wholesale resentment towards the Ukrainian people, many American Jews feel a special connection with them because their ancestors came from Eastern Europe.

Psychologist Pincus-Ward describes having that precise feeling while aiding the Ukrainian family. “It was like having my grandparents back, just listening to the accent. We shared some common foods, like borscht and stuffed cabbage, that I knew from my grandparents… It felt like they landed on our doorstep. How could I not help?” Pincus-Ward said.

Similar stories are playing out throughout the US, which is now accepting Ukrainian refugees through a program called Uniting for Ukraine. The program, which receives almost no government funding, relies on private sponsors to house and support Ukrainians during their first few months in America. That’s where Jewish organizations have stepped in.

“We had a lot of ties to that part of the world, so we already had a lot of linguistic capability [to help people from Ukraine],” said Elana Broitman, JFNA senior vice president of public affairs, who is originally from Ukraine herself.

Broitman noted that the JFNA is currently providing funding to 20 Jewish Family Service agencies in the US which are helping Ukrainians. These agencies are located in cities throughout the country, including Massachusetts, New York, Chicago and Miami.

Shapiro Foundation director Larry Tobin said that his foundation provides up to $2,500 in assistance per Ukrainian family, and has a goal of bringing 1,000 Ukrainian families to the US by Thanksgiving. “Ed and Barbara Shapiro give their money because they’re Jewish, not because the people they’re helping are Jewish,” he said. “The Torah speaks clearly about helping the stranger.”

Jewish humanitarian organization HIAS is supporting over 30 Welcome Circles that are helping people who fled from the war in Ukraine, according to spokeswoman Merrill Zack.

It takes a (modern) shtetl

In Framingham, Massachusetts, the Jewish Family Service of Metrowest recently hired a Russian and Ukrainian-speaking staff member who is now helping 30 families from Ukraine apply for work authorization and fill out applications for food stamps, cash assistance and medical insurance.

On a recent afternoon, Iryna Saks from Jewish Family Service helped Olena Mironyuk and her two daughters through some paperwork. Mironyuk, 42, fled the Ukrainian capital with her daughters during the first days of the war. The family (who are not Jewish) are staying in the furnished basement apartment of Lisa and Stuart Kliman, members of a local Reform synagogue. They share the kitchen and eat their meals together several times a week.

“The impression I got is that I landed in the hands of an angel,” Mironyuk said. Indeed, many Jewish hands have helped the Mironyuk family since they landed in the US.

Illana Nissenbaum, a member of Temple Beth Elohim (the same synagogue where the Klimans worship), has become the Mironyuks’ personal driver. Every day, she brings them wherever they need to go. “I didn’t expect this. I thought I would just be there one day to welcome them. But they grabbed my heart,” Nissenbaum said. “My grandparents are Holocaust survivors… I felt myself, knowing the history of my grandparents, that I had to do something to help the refugees from Ukraine.”

Nissenbaum hosted a barbecue at her home for Ukrainian families in the area to meet and get to know one another. She also arranged for Olena Mironyuk’s daughters Arina and Masha, who are 11 and 13 years old, to attend the Jewish Community Center’s summer camp for three weeks, while her husband offered to give Mironyuk driving lessons.

One synagogue member signed Arina and Masha up to have access to a swimming pool. Another member of Temple Beth Elohim paid for tuberculosis blood tests for Mironyuk and her daughters, which otherwise would have cost the family $130 per person — a small fortune for the average Ukrainian, made even larger now since the local currency has plummeted, decimating the savings of fleeing families.

“I don’t know enough words in English to express how grateful we are,” Mironyuk said.

Every week the synagogue has meetings for participants to discuss what needs to be done to help the three Ukrainian families that are now receiving help from the temple. “I always had hoped that people throughout the world would help Jews. I think that’s what Jews should be doing and what people throughout the US should be doing,” said Lisa Kliman, the 58-year-old anesthesiologist who has welcomed Mironyuk into her home.

She said that there is no better way to combat antisemitism than for Jews to show their best side. “The history is very complicated, but I look at it in a much simpler way. We are all human beings, and atrocities are atrocities,” she said. “The young people in Ukraine can’t be responsible for what their ancestors did.”