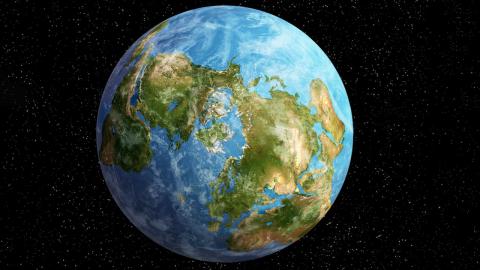 From Columbia to Rodinia to Pangaea, Earth has seen a few supercontinents come and go in its ancient past. Now, researchers theorize that these giant landmasses form in regular cycles, about once every 600 million years. They even predict when and where the next supercontinent will form, driven by the creeping flow of rocks in our planet’s hot mantle.

“It’s not an entirely surprising idea, but I like the way it’s put together,” says Paul Hoffman, a geologist and supercontinent expert at Harvard University who was not involved with the work.

Continents sit on tectonic plates—slabs of crust that float on the mantle. The mantle acts like a boiling pot of water: Earth’s molten core heats the rock at the bottom of the mantle, causing it to slowly rise. Meanwhile, cooling slabs of crust sink in subduction zones to the bottom of the mantle. This circular flow is called mantle convection, and over millions of years it drives the motions of continental plates—and their occasional assembly into supercontinents.

To study how Gondwana became Pangaea, the researchers mapped the continental plates over time, based on fossils and other deep-time records. And they explored how the position of these continents related to models of mantle flow—and the expected location of ancient upwellings and downwellings.

They found continents tend to drift “downhill” toward subduction zones where mantle rocks are cooling and sinking down. Mitchell calls these zones “subduction girdles,” because the continental plates, too thick to subduct, go there and “get stuck,” he says. They can only move laterally along this girdle and collect more continents, a process seen as Gondwana became Pangaea, the team reported in November 2020 in Geology.

Their model also predicts what’s next for our planet. When Pangaea broke up 175 million years ago, it led to the formation of the Ring of Fire, a set of subduction zones along the perimeter of the Pacific Ocean that fuels volcanoes and earthquakes. Several continents have already combined to create the current megacontinent, Eurasia, and it has run up against the Ring of Fire, the subduction girdle of our age. As Eurasia moves laterally along the Ring of Fire, it will eventually collide with the Americas, forming a new supercontinent in the next 50 million to 200 million years, Mitchell says.

Geologists have named this next supercontinent “Amasia.” Although there is much debate on where Amasia will end up, Mitchell’s model suggests it will likely be polar, centered on today’s Arctic Ocean.

“We can see that there’s a sort of rhythm to the Earth’s evolution,” says Damian Nance, a geologist at Ohio University and expert on supercontinent evolution. “The jury’s still out” on whether Mitchell has solved the exact rhythm, he says, but “the pendulum is swinging towards [his] model.”