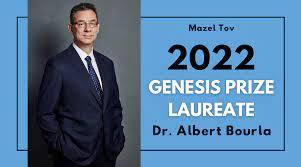 Albert Bourla, the CEO and chairman of Pfizer, accepted this year’s annual $1 million Genesis Prize in Jerusalem on Wednesday evening, announcing that he would donate the funds towards a planned Holocaust Museum in Thessaloniki, Greece, where he was born.

Bourla, the son of Holocaust survivors, led his company to develop the Pfizer-BioNTech vaccine against COVID-19 in just nine months. Nearly 20 million lives were estimated to be saved by COVID-19 vaccines during the first year they became available. The annual prize, awarded since 2014, is given to “extraordinary individuals for their outstanding professional achievement, contribution to humanity, and commitment to Jewish values.”

At a glittering ceremony attended by around 900 guests, including President Isaac Herzog and his wife, Michal, Bourla recalled his parents, among just 2,000 survivors of the Holocaust among a prewar Jewish population in the city of 50,000. He credited his mother Sara, who was saved from a firing squad by a bribe seconds before she was due to be shot, for influencing his life’s path by always insisting that nothing was impossible.

Lauding Bourla for his achievements, Herzog said: “He was not deterred by high stakes, by naysayers, by conspiracy or by politics. He believed in the vaccine and invested every ounce of himself in realizing what seemed at the time a far-fetched fantasy. The vaccine was developed in record speed, utilizing the technology of tomorrow to successfully hold back a devastating pandemic.”

Israel was one of the first countries to vaccinate its population against COVID-19, using Pfizer’s shot. Noting his pride in being both a Jew and a citizen of Greece, Bourla thanked Israel, which he first visited 45 years ago, for providing his company with extensive data about the safety of the vaccine.

The Genesis Philanthropy Group was co-founded ten years ago by Ukraine-born oligarchs Mikhail Fridman and German Khan, and Russian-born Petr Aven. It provided a permanent endowment of $100 million to establish the Genesis Prize Foundation.

All three men stepped down from the Genesis Philanthropy Group’s board in March after being slapped with Western sanctions for their links to Russian President Vladimir Putin after the Russian invasion of Ukraine. A spokesperson for the Genesis Prize Foundation stressed that GPF was a “fully independent Israeli public benefit company” and that “sanctioned individuals or entities” played no part in it.

Dozens of protesters — many of them anti-vaxxers — gathered outside the Jerusalem Theater to protest the honoring of Bourla and the use of oligarch money for this year’s prize. Inside, the ceremony began by acknowledging the “pain and suffering of the Ukrainian people,” and showing an extensive photo montage of the destruction being wreaked by the Russian invasion of that country.