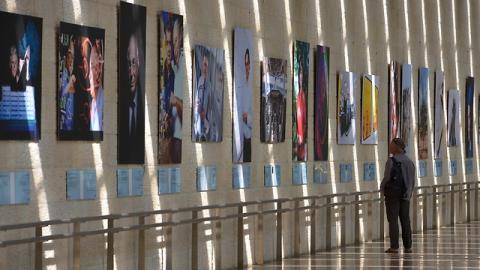 Project initiated by Science Ministry highlights scientific contributions by Israelis that have changed the world, after survey suggests many Israelis are unfamiliar with the subject.

Going abroad? You have a chance to learn about Israel’s groundbreaking scientists. Ben Gurion International Airport unveiled this week the first exhibition of its kind, initiated by by the Science Ministry, showcasing 60 Israeli developments and discoveries that influenced the world. The exhibit is set to run for one year on a wall stretching from passport control to the duty-free area, which 8 million people pass through annually.

The purpose of the exhibition is both public diplomacy and making science accessible to Israelis. A recent Ministry of Science survey painted a worrying picture regarding the Israeli public's familiarity with scientific topics and central figures. The survey showed that 43 percent of Israelis do not know that former president Chaim Weizmann was originally a chemist, and about half of Israelis can’t name a single Israeli scientist who won a Nobel Prize.

In order to make science more accessible, the ministry initiated, in cooperation with the Israeli Young Academy, the exhibit presents science in Israel and the prominent people. The exhibit features about 60 discoveries and developments in Israel selected for their innovation and their direct or indirect influence of the lives of millions of people worldwide. The committee that chose the discoveries was composed of representatives from the Israeli Youth Academy and the Chief Scientist at the Ministry of Science.

Alongside well-known developments such as cherry tomatoes, USB flash drives, PillCam, Copaxone (used to treat multiple sclerosis), a robot for back surgeries, the Mobileye system for preventing accidents, and Intel’s chips, all developed in Israel, there are also important, lesser-known contributions: A method to activate immune cells in cancer treatment, technology for early diagnosis of diseases via one’s breath, drugs to treat Alzheimer's and Parkinson's disease, the discovery of fungal species in the Dead Sea, the development of strains of seedless cotton, the development of algae for healing heart tissue, detecting the shape of bacteria's self-organization, development of muon detectors that were used in the particle accelerator at CERN, the Venus satellite for environmental monitoring, and more.

A large part of the exhibition is devoted to eight winners of the Nobel Prize from Israel, the three Israeli winners of the Turing Award in computer sciences, and the winner of the Fields Medal, the equivalent to the Nobel Prize in mathematics. The exhibit begins with photographs of Israeli-linked historical figures who contributed to science, such as Chaim Weizman, agronomist Aharon Aharonson, Maimonides, Albert Einstein, and others. It also displays developments from various branches of science: medicine, agriculture, environmental science, archeology, chemistry, social sciences, exact sciences, and more.

Science Minister Ofir Akunis said: "The exhibition is an incredible public diplomacy asset for Israel. We present the tremendous contribution of science and technology in Israel to the world and humanity as a whole. We have much to be proud of. Israel is a trailblazer and leader in innovation. The whole world watches in amazement and appreciation our mighty achievements, and so they should be displayed at Israel’s entry and exit gates. "