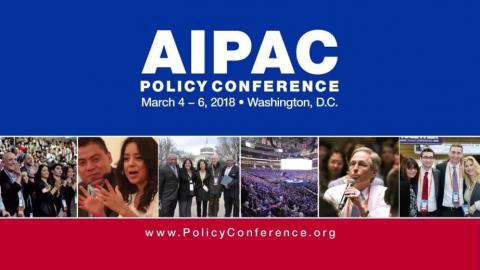 The American Israel Public Affairs Committee launched its annual conference with an appeal to bipartisanship, including a plea to progressives not to leave the pro-Israel cause. “To my friends in the progressive community, I want you to know we are partners in this project,” AIPAC president Mort Fridman said Sunday at the launch of this year’s conference at the Washington convention center.

“The progressive narrative for Israel is just as compelling and critical as the conservative one,” Fridman said. “There are very real forces trying to pull you out of this hall and out of this movement and we cannot let that happen — we will not let that happen!” The crowd applauded. Fridman said maintaining bipartisan support for Israel was critical in a polarizing time. “People are angry and hurting and frustrated and fed up,” Fridman said. “There’s an impulse to walk away from politics to retreat to partisan corners and to demonize the other side. We cannot let those impulses win the day.”

AIPAC has been buffeted in recent years by tensions between Israel and Democrats during the previous administration led by former president Barack Obama. It is striving to rebuild bipartisan support at a time when President Donald Trump has made good on promises that AIPAC has had for years on its agenda: recognizing Jerusalem as Israel’s capital, and seeking to alter the 2015 Iran nuclear deal. Fridman’s thanks to Trump for those policies earned extended applause. Also besetting the relationship is Trump’s low approval ratings among American Jews, many of whom are repulsed by the bigotries they perceive in his rhetoric and policies, and his projected rollbacks of social safety nets.

Trump is due Monday to meet with Prime Minister Benjamin Netanyahu, who has been effusive in his praise of Trump. One of the keynote speakers Sunday morning was former Michigan Governor Jennifer Granholm, a Democrat, who called Israel a “progressive paradise” because of its support for women’s rights, LGBTQ rights, and its subsidies for health care and parental care. “Israel can be a role model for other nations, including America, showing how citizens are cared for,” said Granholm, who got a standing ovation.

Another issue sowing tensions between Israel and American Jews are Netanyahu’s reneging on pledges over the years to improve the status of non-Orthodox Jews in Israel. Ambassador Ron Dermer told the AIPAC crowd that he expected “good news” later this year on allowing organized non-Orthodox prayer at the Western Wall, one of Judaism’s holiest sites.

An estimated 18,000 activists are attending the conference, which culminates in a Capitol Hill lobbying day on Tuesday. On AIPAC’s legislative agenda is introducing new Iran sanctions as a means of toughening the 2015 deal, which AIPAC opposed; codifying into law a pledge of $38 billion over ten years in defense assistance Obama promised in his waning days in office; and support for measures that would set penalties for compliance with boycotts of Israel and Israeli settlements in the West Bank.