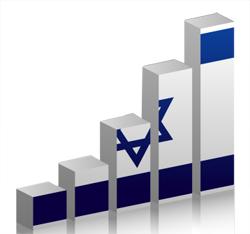 Only independence, freedom, enterprise, fairness and equality of opportunity will achieve sustainable for the country and its people.

Independence Day is traditionally the season for the press to recount Israel's miraculous achievements over its brief history. They praise Jewish genius, recall the country's academic and cultural accomplishments, trace the victories of its high-tech industry and tell the stories of the entrepreneurs and leaders who have dedicated their lives to making the country a better place.
But in recent years the reality has grown ever-distant from the image marketed to the public on Independence Day. The public sector's competitiveness and sophistication has eroded; high-tech operates inside a bubble and can't support the broader economy; small cliques of capitalists, the politically powerful and the media run the country and the business sector; inequality digs its roots ever deeper; and the human capital on which the economy's future relies is deteriorating.

Still, for the first time in many years, Independence Day can be seen as a true economic and social celebration for all its citizens. It marks the end of a year in which a true independence movement finally emerged for Israelis who have never had access to power and influence.

It's a movement that is neither right nor left. It refuses to invest all its hopes in keeping the occupied territories or returning them to the Palestinians. It isn't concerned about strengthening religious observance or weakening it. It doesn't fit the empty stereotypes of socialist or capitalist. It's a movement that promotes fairness, integrity, equality and opportunity for all.

The Israel independence movement has made significant gains in the last several months, most importantly by putting a brake on the relentless expansion of oligarchism and tycoonism while clearing away the political and security smokescreen that benefited a small and privileged elite. But the movement's greatest accomplishment was to raise the consciousness of hundreds of thousands of people who for years blindly accepted the system of a self-serving elite. They finally understand that the existing situation isn't a fait accompli dictated by the difficult reality of a small country in a bad neighborhood.

By rejecting long-held ideas, the Israeli people won their conceptual independence. Here are a few examples of ideas entering the ash heap of history. Israel as an economic miracle. Many sectors of the economy perform poorly, the educational system is in steep decline, and income inequality is among the highest in the developed world. Two or three years ago, most Israelis were in the dark about these numbers. Those who might have known better were benefiting from a system even as it was becoming increasingly dysfunctional.

A growing economy means a better life. In Israel, as in the United States, it is becoming increasingly clear that it's not just how big the pie is getting but how it is divided up and what are the ingredients.

It's either capitalism or socialism. The battles over the years between the supporters of these two great economic doctrines helped ensure the continuance of the existing system. Now these hollow doctrines are being replaced by ideas of equality of opportunity; inclusion; enterprise; and other values.

Peace will solve all our problems. Suddenly, Israelis realize that the peace process that has been underway for decades is controlled by a tiny elite that benefits from the existing economic situation. Could it be that our military, political and business leaders need the "process" more than a solution?

The press is free and independent. We know this because journalists routinely criticize politicians and expose their misdeeds. Or do we? Suddenly, hundreds of thousands of Israelis understand that individual politicians are ineffectual and unimportant. Where the press fails is regarding people with real economic and political power.

Inequality is due to Haredim, Arabs, globalization and technology. The economist James K. Galbraith published a book this month, "Inequality and Instability: A Study of the World Economy Just Before the Great Crisis." It takes apart the thesis that attributes growing inequality to globalization and technology. Instead, he argues, it's the expansion of the global financial system, which is structured to enrich the minority at the expense of the rest. Here in Israel, the people are being liberated from the notion that the ultra-Orthodox and insufficient investment in education are creating social gaps. Israelis now understand that we have an economic system that preserves the advantages of a small minority both in the public and private sectors.

The big parties are ideologically different. Most of our political parties want to preserve the economic status quo. Some of them do that by backing private sector monopolies, and even strengthening them, while others want to do the same for public sector monopolies. Not one party has proposed a program of real change for those who don't have an in to the system or can exploit the magic of debt and deficits.

That's the good news for every Israeli, particularly those standing outside the corridors of power. The day will come when even those on the inside will understand that they need to encourage the movement, because only independence, freedom, enterprise, fairness and equality of opportunity will achieve sustainable prosperity for the country and its people.