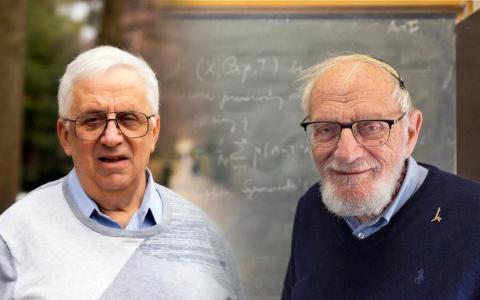 Two mathematicians who used randomness to cast new light on the certainties of mathematics will share the 2020 Abel Prize — one of the field’s most prestigious awards. Israeli Hillel Furstenberg and Russian-American Gregory Margulis won “for pioneering the use of methods from probability and dynamics in group theory, number theory and combinatorics”, the Norwegian Academy of Science and Letters announced on 18 March. Each of them bridged gaps between diverse areas of maths, solving problems that had seemed beyond reach.

Furstenberg said that he reacted with "total disbelief" when he learnt he had won. "I had known about the prestige of the Abel Prize and knew the list of former laureates,” he told an interviewer during the announcement. “I simply felt that these are people of a certain league, and I was not in that league.” He added that, early on, he did not foresee the impact that his ideas were going to have. “Like any mathematician, I follow my nose and look for what seems to be very interesting."

Margulis said that he, too, felt greatly honoured to receive such recognition from the mathematical community.

A common thread in the work of both mathematicians has been the use of techniques from ergodic theory, a field of maths that originated in the study of physics problems such as the motion of billiard balls or planetary systems. Ergodic theory studies systems that evolve in time, eventually exploring almost all their possible configurations. These systems are typically chaotic, meaning that their future behaviour can only be guessed using probability.

But that randomness can be a strength when applied to other mathematical problems. “If you want to understand one big space, one way to do it is to explore it randomly,” explains Terence Tao, a mathematician at the University of California, Los Angeles.

In seminal papers in the 1960s1 and 1970s2, Furstenberg used ergodic ideas to show how even the most random sets of infinitely many whole numbers had to conceal some kind of regular structure, explains Alex Lubotzky, a mathematician at the Hebrew University of Jerusalem who was one of Furstenberg’s students. “Even if you have chaos, if you look carefully you will find order in it,” he says. “It's like the stars in the sky — they look completely random, but the ancient Greeks could see the constellations.”

Furstenberg’s ideas had an impact across fields seemingly distant from ergodic theory, including geometry and algebra. Building in part on his work, Tao and his collaborator Ben Green, a mathematician now at the University of Oxford, UK, announced a breakthrough in number theory in 2004. They showed that the set of prime numbers contains arithmetic progressions — sequences that contain constant intervals, such as the two steps between each of 3, 5 and 7 — of arbitrary length3. These sequences form one of the most striking patterns ever discovered in the seemingly random arrangement of primes across the set of all whole numbers.

Both Furstenberg and Margulis endured discrimination because of their Jewish background. Furstenberg was born in 1935 in Berlin, and his family escaped Nazi persecution when he was just 4 years old, settling in New York City; he later moved to Israel, where he taught at the Hebrew University of Jerusalem from 1965 until his retirement in 2003. Margulis was born in Moscow in 1946, and was subject to anti-semitism in the Soviet system. This prevented him from travelling outside the country to collect his Fields Medal — another major award in maths — in 1978. He subsequently emigrated to the United States and is still active at Yale University in New Haven, Connecticut.

Margulis got some of his biggest results at a young age, and his fame had spread even before researchers outside the Soviet Union had had a chance to meet him in person. “He was a legend”, recalls Lubotzky. Margulis won the Fields Medal aged 32 thanks to his work in the theory of symmetries, which encompasses continuous transformations in geometry, such as the rigid motions of a plane or the rotations of a sphere.

The mathematician who introduced Margulis during his Fields Medal ceremony said that “on several occasions, he has bewildered the experts by solving questions which appeared to be completely out of reach at the time”. Some of his results have provided the foundation for work by at least three subsequent Fields Medal winners, according to the Norwegian academy.

“The prize this year connects to many earlier laureates,” says Hans Munthe-Kaas, a mathematician at the University of Bergen in Norway who chairs the Abel Prize committee. “It’s quite amazing how these people have crossed boundaries.” In particular, 2014 winner Yakov Sinai (who was Margulis’s PhD adviser) developed ergodic techniques in chaos theory, and Endre Szemerédi won in 2012 for his work on, among other thing, linking ergodic theory with the theory of integer numbers.

The Abel Prize is named after Norwegian mathematician Niels Henrik Abel (1802–29) and was established in 2003. The two winners will share 7.5 million Norwegian kroner, or about US$ 625,000.

Because of the ongoing coronavirus pandemic, the academy decided to postpone the award ceremony, which would normally have taken place in Oslo in May. Instead, the 2021 ceremony will celebrate winners for both the 2020 and 2021 prizes. “It’s extraordinary times, so we have to do things a little bit differently this year,” Munthe-Kaas says.