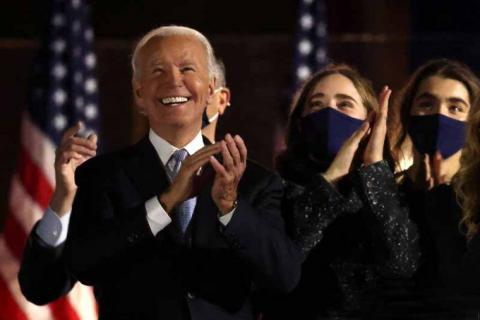 73% worried about the continued distance in views between Israel and American Jewry, particularly over widespread Israeli support for Donald Trump and American Jewish support for Joe Biden. Despite overwhelming support for US President Donald Trump in Israel, a large majority of Israelis believe President-elect Joe Biden will still support the Jewish state, according to a new study commissioned by the Ruderman Family Foundation.

Conducted under the supervision of Tel Aviv University's Prof. Camille Fuchs and based on responses from 1,000 Israelis, the survey found that 91% of Israelis believed Biden would keep US support for Israel. In addition, 71% expressed satisfaction with the outcome of the US elections, and only 20% said they were completely unsatisfied.

Nearly half (49%) of Israelis also felt Biden will keep the status quo in Israel's relationship with American Jews, while 18% thought it  would become stronger and 23% thought it would weaken. However, 73% worried about the continued distance in views between Israel and American Jewry, particularly over widespread Israeli support for Trump and American Jewish support for Biden. “Our survey results reflect that the Israeli people still overwhelmingly believe in the enduring power of the US-Israel relationship regardless of the occupant in the White House,” Ruderman Family Foundation president Jay Ruderman said in a statement.

“The divisiveness of the US election is also evident inside of the Jewish community, both in Israel and the United States. It will continue to be a top communal priority to bridge these divisions for the next four years and beyond. ”The study was released during a panel discussion in the Knesset Caucus for Israel-American Jewry Relations, co-hosted by caucus co-chairs MK Mickey Levy (Yesh Atid) and MK Keren Barak (Likud) as well as the Ruderman Family Foundation.

Speaking at the panel, former White House press secretary Ari Fleischer expressed reservations about the incoming Biden administration, warning that despite Biden's support for Israel, its ties with the US will likely be strained compared to during the Trump administration. “With President Biden coming in, I think you can expect the high-water mark of the Trump years to start to recede,” Fleischer explained.

“Even if President Biden, on some of the major issues, does have a history of being a friend of Israel, I don’t think it is going to translate throughout the [other echelons of the US] government. We saw that in the Obama years. ”This, he believes, is due to others in the government and in the Democratic Party not necessarily sharing Biden's views. Fleischer recounted his time working under president George W. Bush, who was very pro-Israel.

However, he had trouble implementing these policies due to obstruction from the State Department, the US Embassy and other parts of the government.In order to get support from the Democrats, the former White House press secretary recommended playing up normalization with the UAE and Bahrain as part of future grassroots advocacy.