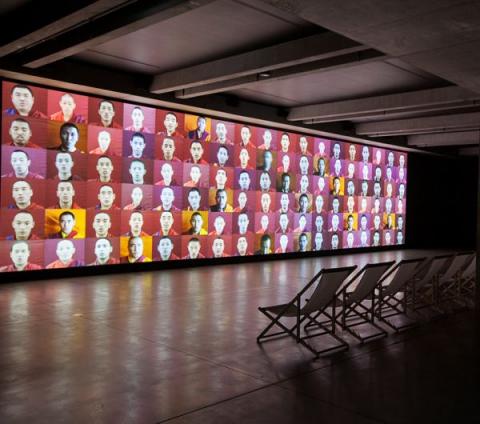 Venice and Berlin, eat your heart out! Jerusalem is taking on some of the major world biennale cities as it hosts the 4th Jerusalem Biennale for Contemporary Jewish Art, from now through to November 28. Showcasing the work of 200 professional artists, Israeli and international, Jewish and non-Jewish, in 30 exhibitions and 14 venues around the city, the Jerusalem Biennale offers a unique encounter between contemporary art and the world of Jewish content.

This year, the theme “For Heaven’s Sake” (L’shaym Shamayim) refers to the well-known Mishnaic verse: “Any dispute which is for the sake of Heaven will ultimately endure, and one which is not for the sake of Heaven will not ultimately endure’. According to Jerusalem Biennale founder Rami Ozeri, “In the Jerusalem Biennale, we explore issues such as what motivates us as artists to create. One possible answer – for Heaven’s sake – is a metaphor for a range of possible interpretations that span the heavens themselves. We also explore the Jewish tradition of dispute.”

The Jerusalem Biennale has grown both in size and scope since its founding in 2013, when 60 Jewish artists from Israel and the Diaspora participated. In 2019, reflecting the growing reputation for the Biennale in the international contemporary art world, more than 100 Israeli and international proposals from Jewish and non-Jewish curators were submitted to the selection committee, of which 30 were chosen.

The iconic Jerusalem YMCA, which serves as a meeting place for the capital’s diverse population, is a perfect location for the hosted artworks – and arguably the best starting point – for visitors to the Biennale, who can enter all 14 venues on one NIS 45 ticket over the seven weeks of the festival.

The main YMCA exhibition, Ziara, Moroccan Common Wisdom, showcases diverse works of Muslim and Jewish Moroccan artists, alongside Israeli and French artists of Moroccan descent. Ziara highlights the historical and contemporary links between individuals and places in Jerusalem and Morocco. Through contemporary Moroccan art and fashion, Ziara explores the Hebraic foundations that have been formally recognized as being at the heart of Moroccan culture.

In the former YMCA indoor pool, immerse yourself in the hypnotic sounds of 108 chanting Tibetan monks in Waterfall, a video installation by Yugoslavian-American Marina Abramović. On the opposite wall, in a stunning installation by American-Israeli Andi Arnovitz titled I’m Not, look for the loner swimming upstream from over a thousand hand-painted porcelain fish.

IN THE Absence of Writing features the work of award-winning Indian artist Astha Butail and focuses on the oral traditions on the Zoroastrian Avesta, the Jewish Oral Torah and the Indian Veda.

At the Wolfson Museum for Jewish Art at Hechal Shlomo, you can take in several Biennale exhibitions including Living Under Water, an artistic conversation about climate change, the fruits of a residency by five Israeli artists in Venice; Feminine Waters, a solo exhibition by Chani Cohen Zada that tells the stories of women from the Bible painted through a mystical perspective; and Table of Content/Table of Contact, a video installation and selection of original artist books that represent multiple voices of American Jewish artists.

Human Nature Shared Sensitivities contemplates the ultimate question: “What art will stand the test of time?” with artworks by Micha Ullman and Avner Sher alongside young up-and-coming artists. Confrontation/Conversation highlights the work of 18 Argentinian artists in a large conceptual piece that morphs conversation with confrontation. A 50-year retrospective of Israel Dahan, a fitting tribute to the mythical Judaica teacher at Bezalel, will leave you in awe of the sheer beauty of his works.

Underlining the significance of location selection in the Jerusalem Biennale, the Menachem Begin Heritage Center is featuring two fascinating exhibitions. In Experiments with Truth, Indian artists explore religious thought through visual arts on the 150th anniversary of Mahatma Gandhi’s birth. The exhibition Hebrew Suffragists: 100 Years deals with the struggle for women’s voting rights in Israel, in a story now celebrating its centenary.

At Kol HaOt in Hutzot Hayotzer, Not in Heaven addresses the culture of dispute that characterizes Talmudic literature and Jewish life in general through the lens of the famous saga of the “Oven of Akhnai” (Bava Metzia).

At the Hebrew Union College, you can contemplate environmental catastrophes alongside five American artists in Care for the Creation, or study the Jewish heritage of Warsaw alongside Jewish and non-Jewish artists in From Near and Far Away: Dissenting Voices of Warsaw’s Jewish Identity. One exhibition, Heaven is All Around Us, showcases Israeli and American street art woven into Jerusalem’s urban fabric at the First Station.

Other venues, among others, include Van Leer Jerusalem Research Institute, the Clal Center, the Worldwide North Africa Jewish Heritage Center and Mishkenot Sha’ananim. For great insight into the various exhibitions, join a public Jerusalem Biennale tour guided in English by an art expert every day on the intermediate days of Sukkot (October 15-18). Over the course of the Biennale, there will be gallery talks, panel discussions with artists and curators, music and dance performances, as well as the opportunity to arrange English-guided private and group tours.