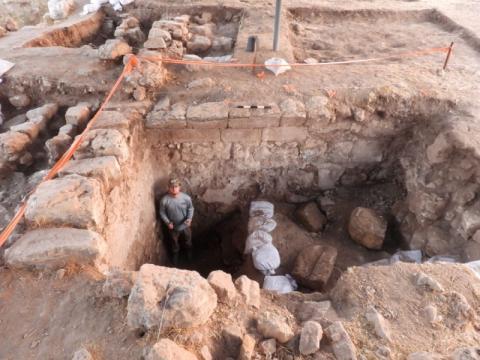 An archeological dig at Tel Tibnah in the Binyamin region has led to the exposure of a 4,000-year-old settlement, dated to the time when the Israelites entered the Land of Israel. At the end of a month of excavations at Tel Tibnah on behalf of the Benyamin Regional Council and the Bar Ilan University, many finds were also uncovered from an ancient city that served as the capital of the district at the end of the Second Temple period.

The excavation at Tel Tibnah, which was directed by Dr. Davir Raviv from Bar Ilan University, is one of the first in Judea and Samaria since the 1980s.

The results of the surveys conducted at the site, as well as its mentions in historical sources, show the presence of a central settlement from the Early Bronze Age to the Ottoman period, and was at times of regional administrative and military importance.

The site is identified with Yehoshua ben Nun’s city of Timnat Serach and is considered by ancient sources to be the town in which he lived and was buried. It was later known as Timnath-Heres, a Hellenistic-Hasmonean fortified site that was a district capital in the early Roman and Byzantine periods.

The excavations exposed a large public mikvah (ritual bath), complete pottery, coins, and bones. A rare coin from the time of the Great Revolt against the Romans around 70 CE was also found, with the inscription “Year two for the freedom of Zion”.

Shards of pottery indicating continuous settlement were also found during the excavations, along with 18 coins, four of which were identifiable. One of the coins was identified as a Roman coin from 58-89 CE, and another was a silver Mamluk coin from the 13th century bearing the figure of a lion – the symbol of the Mamluk Sultan Baibars.

A well-preserved Roman spearhead dating back to the 2nd century CE with its tip bent, a rare find in Israel, was also uncovered at the site.

Tel Timna is one of the largest in the central mountain area in Israel. Its proximity to one of the main routes going up from the lowlands to the mountain and between Samaria and Jerusalem,  and next to a fertile valley sloped with springs, attracted settlers.

Despite its size and importance, the site had not been excavated until recently, and the information about it comes from archaeological surveys and literary sources. Before the Six Day War, the place served as a Jordanian military post, and to this day there are communication trenches that were used by the Jordanian army.

The mound covers an area of ​​about 50 dunams and is divided into two main parts, the head of the mound and its southern and western slopes. The findings of the surveys indicate that the top of the mound was inhabited from the Bronze Age to the Roman period, while the slopes were inhabited from the Hellenistic and Roman periods to the late Arab period, when the center of the settlement was on the western slope of the mound. The findings of the surveys point to two peak periods in the site’s history – the Iron 2 and the Early Roman eras.

To the south of the mound stretches a large necropolis with two tombs with decorated facades, which were visible until the beginning of the 20th century, that are dated to the end of the Second Temple period. At the feet of the graves, a large purification mikvah from the Second Temple period existed that was used by the residents of the site and perhaps by pilgrims who passed through the place on their way to Jerusalem.

Dr. Raviv said that “the study of the excavation findings will shed light on the history of the area and the material culture of its inhabitants in a variety of periods, and especially on the early Roman period when it was located in Tel-Timna, one of the capitals of the district of Judah.”

The head of the Benjamin Regional Council Yisrael Gantz stated that “in the center of Benyamin, the center of the country, an established Jewish town was uncovered that was a focal point on the main road to Jerusalem. It’s exciting to touch the graves and remains and actually touch our roots and heritage. We merit to continue our ancestors here.”

“These discoveries are an answer to anyone who doubts the rightness of the way and our presence here and in all of Israel,” he declared.