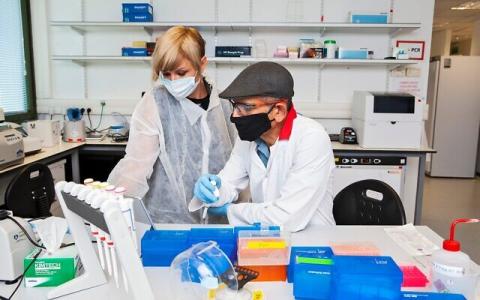 An Israeli company says it has developed a half-hour coronavirus test kit, and predicts it will become a globally available screening solution. Izhak Haviv, chief scientist of AID Genomics, said his company has changed the enzymes and other components normally used in test kits in order to enable small batches of “VIP” tests to be processed in 30 minutes, and bigger batches in around double the time.

“To process a planeload of passengers would take me 75 minutes, and I can push it down to an hour,” he said, adding that he expects the kits to be manufactured and used internationally, and have similar levels of accuracy and false positives as existing kits.

There are various attempts around the world to reduce times for processing tests, and the current low is believed to be 90 minutes. Such tests, however, are generally seen as a premium product, mostly reserved for hospitals given their high cost. Haviv said his testing will be significantly cheaper than existing express services.

The new kit has been sent for approval to regulators, including the US Food and Drug Administration, said Haviv. “They are taking samples and subjecting them to my kit, and they should be done in two to six weeks,” he said. “I hope as a result of this technology, activities involving many participants will be open and not need to close, and right now this is unrealistic,” he told The Times of Israel.

He said that with easy access to expedited screening, some industries will be able to use daily tests to get back on their feet, and commented: “Movie sets, for example, aren’t filming, but if everyone can get tested in the morning, they can know within half an hour if everyone is clean, and start filming.”

The patient experience with AID’s kit will be similar to others — a swab inserted briefly in the nose. But Haviv said that every component of the kit related to analysis of the swab has been changed. One of the key changes is the use of different enzymes from those previously used for test kits. As the kit has been made more sensitive than others, the test samples need less processing and purification before results can be generated.

Swab testing relies on extracting ribonucleic acid (RNA) from swab samples, preparing it for analysis, and then analyzing it. Part of the process is to “amplify” the RNA from patients, which contains a limited, undetectable amount of virus, and increasing the quantity of RNA fragments identifiable as originating from SARS-CoV-2. Enzymes are used in this process.

Haviv said that his kit requires less RNA than others to reach a decision on whether a person has coronavirus. This means that the RNA needs to be subjected to a smaller amount of amplification than normal, and the amplification that is necessary takes place more quickly due to the newly chosen enzymes. “We worked on this for three months,” he said. “Now we have an actual tool that is 50 times more sensitive than tests kits produced until now.”

AID partners with the Chinese-owned BGI Group, a major global player in testing, on several coronavirus-related projects. One of the AID-BGI collaborations has been to set up the analysis centers and provide the kits, materials and technical support for six Health Ministry labs in Israel, supplying hundreds of thousands of tests for the Israeli labs.