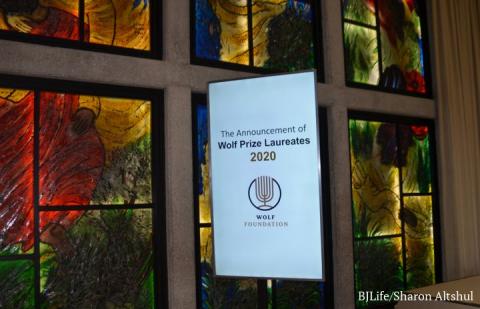 The winners will receive prizes worth $100,000 each, in five fields: medicine, physics, mathematics, agriculture and art.

Medicine: “Genetic scissors” technology – The medical-scientific world is grappling with the phenomenon of bacterial resistance to antibiotics, which is steadily worsening. On that backdrop, and in light of ongoing development of technologies for genetic sequencing, mapping and editing, new possibilities are arising for studying the infectious bacteria. The Wolf Prize in Medicine is being awarded this year to Prof. Jennifer Doudna (U.S./University of California, Berkeley) and fellow French biochemist Prof. Emanuelle Charpentier (France/Max Planck Institute for Infection Biology) for spearheading discovery of the revolutionary gene-editing tool CRISPR-Cas9. CRISPR technology, usually described as “genetic scissors,” makes it possible to intervene in the genetic activity of the cell – i.e., to change, repair or remove genes. This new tool is now being used in molecular biology laboratories worldwide, and has the potential to lead to new treatment for incurable diseases – despite the fact that its use arouses ethical and other questions.

Physics: Carbon and superconductors – The Wolf Prize in Physics will be jointly awarded this year to three researchers: Prof. Pablo Jarillo Herrero (Spain/Massachusetts Institute of Technology), Prof. Allan H. Macdonald (U.S./University of Texas) and Dr. Rafi Bistritzer (Israel/Applied Materials), for their pioneering theoretical and experimental work on twisted bilayer graphene, a type of carbon, which constitutes a basis for a new generation of materials and technologies with applications in the fields of energy, electronics, environmental sciences and the computer industry. Researchers in a team headed by Macdonald in 2011 have hoped, among other things, that their findings will lead to the creation of a new superconductor that would enable the passage of electric currents without resistance and without a loss of energy.

Mathematics: Changing differential geometry – Prof. Simon Donaldson (U.S./State University of New York at Stony Brook; Imperial College London) and Prof. Yakov Eliashberg (U.S./Stanford University) are receiving the 2020 Wolf Prize in Mathematics for their contribution to differential geometry and topology. Eliashberg is one of the founders of symplectic and contact topology, a field that began as a mathematical language used to solve problems of classical mechanics, and is closely related to modern physics. Since 2000, he and his colleagues have helped lay the foundations for a theory of a symplectic field – a powerful and sophisticated algebraic structure – that has led to significant progress in many fields.

Agriculture: Affecting plants’ “memories” – The Wolf Prize in Agriculture is being awarded this year to Prof. Caroline Dean (U.K./John Innes Centre, Norwich, England) for her pioneering discoveries relating to plants’ memory mechanisms and temperature sensing, which can help farmers control the flowering and budding of certain crops in varying and changing environmental conditions. Her research involves the cloning of genes controlling the flowering of the Arabidopsis thaliana plant (rockcress), in response to vernalization – a process whereby the plants “remember” that they were exposed to a low temperature in order to time their blossoming. Dean’s work has implications not only for agriculture, but for the entire field of biology.

Art: Through a different lens – Renowned American photographer Cindy Sherman is receiving the 2020 Wolf Prize in Art for redefining the concept of art created with a camera. In her work, Sherman, considered one of the most influential personalities in the realm of contemporary art, focuses on identity stereotypes that have taken shape throughout the history of art and of advertising, cinema and the media, capturing herself in images that are in turn amusing, disturbing and even distasteful, at times.