How Facebook plans to more or less build a teleporter 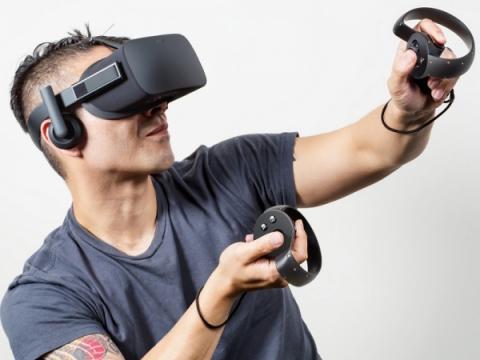 Facebook's chief technical officer, Mike Schroepfer, says that when the company thinks about where it wants to be by 2025, it aims to "effectively build a teleporter." "Facebook wants to build a device that allows you to be anywhere you want, with anyone, regardless of geographic boundaries," Schroepfer added at a press event on Tuesday morning before his appearance at the Dublin Web Summit.

The company is already heading toward that with the Oculus Rift virtual reality headset, which will come out early next year. But Schroepfer envisions a future in which Oculus will be able to trick your senses into thinking its virtual world is real, mimic the world around you in real-time, and give regular people the ability to create anything they imagine in 3D. The company is already in the early stages of working toward these goals.

Closing the reality gap in 3 parts

To get there, Facebook is working on closing three gaps that make virtual reality feel fake today. Seeing yourself and others. One of the biggest challenges with making virtual reality feel real is allowing people to see themselves — for example, being able to look down and see their hands — and other people.

The Oculus Touch controllers, which Facebook plans to release in the second quarter of next year, can detect your movements to let you interact with objects in the virtual world and will make it feel as if you can see your hands. Meanwhile, Oculus is testing a combination of a pressure sensor in the Rift with a camera for capturing your facial expression. Together, they will let your VR avatar mimic your real-world expressions. "It's incredible how quickly your brain thinks it's with another real person," Schroepfer says.

Imitating the environment. Oculus is also making strides with the second challenge: mimicking the actual environment. Earlier this year, Oculus acquired a computer vision company called Surreal Vision. Right now, the team is working on ways to model the world and reconstruct a scene it can pull into virtual reality in real-time. The Surreal Vision team is still working on early-stage prototypes, but Schroepfer says possibilities there are "enormous."

Letting people create their own worlds. For the third challenge, Oculus needs to give normal people without a lot of money or training a way to create their own VR content. When the Touch controllers ship, they'll come with a program called Medium that will let people shape 3D objects. The goal is that eventually anyone who uses Oculus will be able to build his or her own virtual worlds.

Schroepfer says the ultimate vision of Oculus is democratizing access to experiences and information, by letting people in any part of the world feel as if they can go anywhere and do anything.