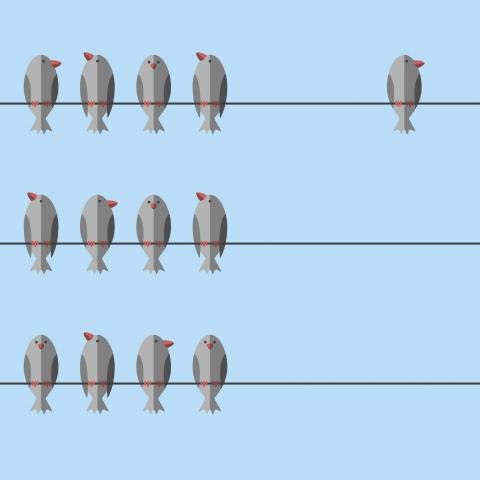 Those who struggle in social situations may be at greater risk for mental and physical health problems, according to a new study from the University of Arizona. That's because people with poor social skills tend to experience more stress and loneliness, both of which can negatively impact health, said study author Chris Segrin, head of the UA Department of Communication. The study, published in the journal Health Communication, is among the first to link social skills to physical, not just mental, health.

Study participants who had deficits in those skills reported more stress, more loneliness, and poorer overall mental and physical health, Segrin said. While the negative effects of stress on the body have been known for a long time, loneliness is a more recently recognized health risk factor. "We started realizing about 15 years ago that loneliness is actually a pretty serious risk for health problems. It's as serious of a risk as smoking, obesity or eating a high-fat diet with lack of exercise," Segrin said.

Segrin likens the experience of loneliness to the way people feel when they're in a hurry to get out the door and can't find their keys — except the feeling never truly goes away. "When we lose our keys, 99 percent of the time we find them, the stress goes away, we get in the car and it's over," he said. "Lonely people experience that same sort of frantic search — in this case, not for car keys but for meaningful relationships — and they don't have the ability to escape from that stress. They're not finding what they're looking for, and that stress of frantically searching takes a toll on them."

Where Do Social Skills Come From?

Social skills are mostly learned over time, beginning in your family of origin and continuing throughout life. Yet, some scientific evidence suggests that certain traits, such as sociability or social anxiousness, may be at least partly hereditary, said Segrin, who has studied social skills for 31 years. While Segrin doesn't address it in his current study, he says that technology, for all its benefits, may be taking a serious toll on social skills, especially in young people.

"The use of technology — texting, in particular — is probably one of the biggest impediments for developing social skills in young people today," he said. "Everything is so condensed and parsed out in sound bites, and that's not the way that human beings for thousands of years have communicated. It makes young people more timid when they're face-to-face with others, and they're not sure what to say what to do. There's no social interaction, and I fear that's really hurting young people."

Parents can help with their children's social skills —  and, in turn, their health — not only by limiting screen time but also by making sure children are regularly exposed to situations that require in-person social interaction, Segrin said. "It could be a summer camp, a sporting program, a church group — something where they can hang out with peers and just talk and do things together," he said.

Future research, Segrin said, should explore how other aspects of social skills might impact health. He also is interested in looking at how social skills impact those struggling with chronic illness. "I want to get the word out about how valuable good communication skills are," Segrin said. "They will not just benefit you in your social life but they'll benefit your physical health."