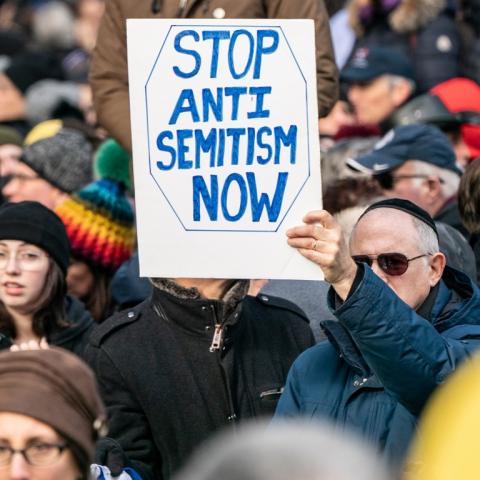 Almost one in five of the antisemitic incidents recorded during 2020 were related to the coronavirus crisis, RIAS said in a statement. Such incidents often occurred during demonstrations against social distancing, through “the spread of antisemitic conspiracy myths, perpetrator-victim reversals and Holocaust trivializations.”

RIAS also recorded 123 instances of antisemitic leafleting, 51 instances of threatening behavior and 43 instances of property damage. There were a total of 17 attacks involving physical violence — half of the previous year’s number, and reduction likely caused by social distancing, RIAS said.

City officials reacted to the data gloomily. “One thing is clear: Berlin has an antisemitism problem,” Samuel Salzborn, antisemitism commissioner for the State of Berlin, told local media outlets. His view was echoed by the Jewish community’s officer for countering antisemitism, Sigmount Königsberg, who noted: “Every day there are three antisemitic attacks in Berlin.”

Most of the states that compose the Federal Republic of Germany have appointed commissioners to deal with the problem of rising antisemitism in their regions. On Sunday, the state of Thuringia’s antisemitism commissioner issued his own report, noting that there were 116 incidents in this part of central Germany in 2020 — an increase of 25 percent on the previous year.

Georg Maier, who serves as interior minister for the state of Thuringia, blamed the rise on the profusion of antisemitic conspiracy theories about the pandemic and the growing influence of “Querdenken,” a right-wing political group that has vigorously challenged state-imposed coronavirus measures. Demonstrations against social distancing organized by the group have often featured protestors wearing yellow Stars of David and other imagery associated with the Nazi Holocaust — a spectacle described by Maier as an “unbearable abuse of the Holocaust.”

“Especially against the background of the increasing spread of antisemitic conspiracy ideologies in connection with or through the ‘Querdenken’ movement, I see an urgent need for action,” Maier told the newspaper Zeit on Monday.