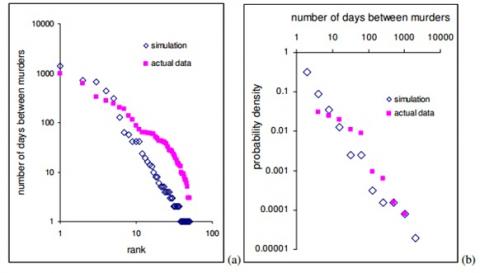 A simple mathematical model of the brain explains the pattern of murders by a serial killer, say researchers.

On 20 November 1990, Andrei Chikatilo was arrested in Rostov, a Russian state bordering the Ukraine. After nine days in custody, Chikatilo confessed to the murder of 36 girls, boys and women over a 12 year period. He later confessed to a further 20 murders, making him one of the most prolific serial killers in modern history.

Today, Mikhail Simkin and Vwani Roychowdhury at the University of California, Los Angeles, release a mathematical analysis of Chikatilo's pattern of behaviour. They say the behaviour is well characterised by a power law and that this is exactly what would be expected if Chikatilo's behaviour is caused by a certain pattern of neuronal firing in the brain.

Their thinking is based on the fundamental behaviour of neurons. When a neuron fires, it cannot fire again until it has recharged, a time known as the refractory period. Each neuron is connected to thousands of others. Some of these will also be ready to fire and so can be triggered by the first neuron. These in turn will be connected to more neurons and so on. So it's easy to see how a chain reaction of firings can sweep through the brain if conditions are ripe.

But this by itself cannot explain a serial killer's behaviour. "We cannot expect that the killer commits murder right at the moment when neural excitation reaches a certain threshold. He needs time to plan and prepare his crime," say Simkin and Roychowdhury.

Instead, they suggest that a serial killer only commits murder after the threshold has been exceeded for a certain period of time.

They also assume that the murder has a sedative effect on the killer, causing the neuronal activity to drop below the threshold.

Simkin and Roychowdhury used their model to simulate the pattern of firing in a brain to see how often it surpasses a given threshold long enough for a murder to take place.

In the model, they used a 2 millisecond period as the fundamental time step, that's about the time between firings in a real neuron. And they simulated some 100 billion time steps, equivalent to 12 years or so, that's about the period that Chikatilo was active. The results are remarkably similar to the distribution of Chikatilo's real murders and Simkin and Roychowdhury speculate that it would be relatively straightforward to introduce a realistic correction factor that would make the fit closer.

They say: "One could enhance the model by introducing a murder success rate. That is with certain probability everything goes well for the killer and he is able to commit the murder as he planned. If not, he repeats his attempt the next day. And so on." This model leads to an interesting insight into the nature of serial killing. It suggests that the likelihood of another killing is much higher soon after a murder than it is after a long period has passed.

That's a well known property of power law distributions that holds true for all kinds of phenomenon. A large earthquake, for example, is more likely soon after another large earthquake. Interestingly, Simkin and Roychowdhury's work bares much similarity to other recent work suggesting that the distribution of epileptic fits also follows a power law. The reasoning here is the same too--that patterns of neuronal firing can spread through the brain, like an avalanche, causing a fit in the process.

This suggests an obvious avenue for future research in working out whether other forms of extreme behaviour, and indeed ordinary behaviour, follow the same pattern. Perhaps these guys and others are already working on the data.

Chikatilo was eventually convicted of 52 murders and executed by a gunshot to head in 1994.