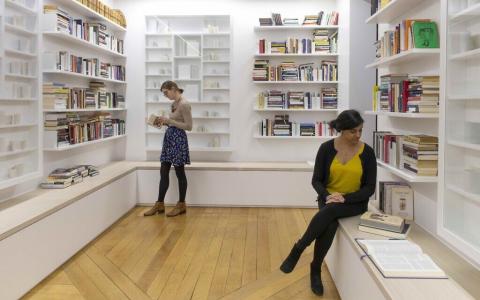 “Library of Exile,” an installation created by the acclaimed British artist and writer Edmund de Waal, was given a second chance for viewing in the artist’s hometown when London’s British Museum reopened to the public on August 27. The British Museum had been closed for the last five months due to the coronavirus lockdown — the longest period its doors have been shut in peacetime since the museum opened in 1759.

Housed inside a temporary, white porcelain-covered pavilion are 2,000 books — some stacked neatly, others haphazardly piled up — written by exiled writers from 88 countries in dozens of languages that were hand picked by de Waal. They range from Ovid, Dante and Voltaire to 20th century émigrés including Walter Benjamin, the poet Marina Tsvetaeva and children’s writer Judith Kerr.

The exhibit is deeply personal: De Waal, the grandchild of Austrian Jewish refugees, wanted to create his “Library of Exile” for his great-great grandfather, Viktor Ephrussi, whose vast book collection in Vienna was taken by the Nazis. De Waal documented the library’s confiscation in his bestselling memoir, “The Hare with Amber Eyes.”

De Waal told The Times of Israel that he drew the first 800 books from his own shelves, which is why there are a lot of German and Austrian works. He said that he needed — and wanted — to make his new library “a generative work that celebrated and commemorated.”

Following its display at the British Museum, the trove of books will eventually be transported to Mosul, Iraq, by Book Aid International, the UK’s leading international book donation and library development charity. They will be donated to the University of Mosul library, which is currently being rebuilt after it was burned down by Islamic State terrorists in 2015.

There is a painful, circulatory element to the books’ final destination, de Waal told The Times of Israel, as Iraq was where the Babylonian Talmud originated. As a whole, the collection represents a similar chronicle of diasporic displacement throughout history. Many of the books are in translation, reflecting the idea of language as a form of migration.

Poignantly etched on one of the exhibit’s external walls are the names of some of the destroyed libraries of the world, from the ancient library of Alexandria to more recent losses in Sarajevo and Tripoli. At the top of another wall, de Waal has inscribed the words, “Where books are burnt, in the end people will be burnt,” written with chilling foresight by the 19th century German poet, Heinrich Heine.

Alongside the filled shelves is “Psalm I-IV,” a quartet of new vitrines by de Waal, whose arrangement reflects the composition of Daniel Bomberg’s 16th century edition of the Talmud, printed in Venice. Structurally significant, it holds the Hebrew text, Aramaic translation and commentary on a single page.

The British Museum shut its doors soon after the installation’s initial opening in March. At its festive March launch, de Waal explained that he was partly inspired by the polarized and toxic way in which refugees have been treated in recent years. To date, “Library of Exile” has had three homes. It was first presented at the 16th century Ateneo Veneto in Venice last year during the Biennale, then traveled on to Dresden before arriving in London.

For de Waal, libraries have different meanings in different places, and each of the three locations of his “Library of Exile” have particular resonance: Venice, with its connection to Jewish life and the ghetto, and Dresden because of its tradition of porcelain art (one of the artist’s main mediums), but also because of its history of book burnings in the 1930s.

London has a very straightforward connection, said de Waal. In 1940, a bomb fell on the British Museum, damaging a part of the King’s Library Gallery, destroying many books collected by King George III.

“That’s obviously strong, but the real context for me is just the sheer quantity of different people and different communities that are going to come to this library. London is an extraordinary place in terms of its exilic communities,” de Waal said.

"London is an extraordinary place in terms of its exilic communities"

Libraries are sanctified, living spaces, believes de Waal, and the pavilion is intended as a place of contemplation and dialogue. However, there are two things that you are not supposed to do in a library, he says: Make noise and write in books. Inside each of the exhibit’s texts is an ex libris label, inviting readers to write their names in a copy that matters to them. Back in March, Kerr’s volume, “The Tiger Who Came to Tea,” was the most popular and it bulged with signed plates. De Waal also welcomes suggestions of titles that can be added to the virtual library via its website.

The visitor experience to the “Library of Exile” will, for now, not be as it was conceived prior to its premature closure. There will be a one-way route through the library, with a maximum of three people able to enter at any one time. Visitors will be prompted to use hand sanitizer on the way in and out and there will be regular cleaning of the hard surfaces within the space. At the time of writing, it is unclear whether visitors will be able to take books off the shelves. Although entry to the installation is free, visitors must now book a timed slot in advance.

De Waal is delighted that the “Library of Exile” has reopened to the public. “For the last five months it has been locked away in the British Museum, unvisited, its books gathering dust in an empty museum. With the reopening, I feel profoundly grateful that we can experience this connection again to a real space,” he said.

For all that technology can now connect between us, there’s just something about books, he said. “We are all learning how to be creative in the digital realm, but we need to pass a book from one hand to another, hear someone’s voice tell a story, read a poem, sing,” he said.