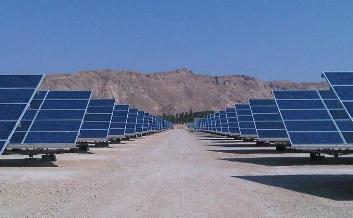 American Yossi Abramowitz, Kibbutz Ketura member Ed Hoflind, and their US-based partner David Rosenblatt have built Ketura Sun, Israel's first commercial solar energy field. On these twenty acres of land in the Negev desert, 18,500 photo-voltaic plates convert the sun's energy into electricity. Only 1% of Israel's electricity currently comes from renewable energy sources, but entrepreneurs like Abramowitz hope to change that. With funding from Siemens, Ketura Sun began operating last June, and it now generates nearly five megawatts for the national grid at peak performance. Although it's a fraction of Israeli's daily peak usage of 11,000 megawatts, the Arava Power Company plans to build 50 more solar fields in the next five years. This is expected to greatly alleviate Eilat's dependence on diesel.

Israel has a national goal to generate 10% of its electricity using renewable sources by 2020, which will be 2.76 gigawatts. There is also an interim goal of 1.6 gigawatts by 2014, and the government expects 460 megawatts from solar power. Arava has plans for 500 megawatts capacity, and competitors are expected to add a further 1000 megawatts. This puts the country largely on schedule for the 2014 and 2020 targets, although some say the government is not doing enough. However, solar energy is still more expensive than natural gas, and analysts say removing restrictions on solar energy fields could result in price increases for consumers.

SOT Arava Power Company President Yossi Abramowitz told us, "The dream is really to have Israel be the first major economy to transform from being carbon-based -- burning dirty fossil fuels -- to being solar-based. Sixty percent of this country is desert, and the sun is nice and strong... If the government would get out of the way, set goals and rational policy we could hit 30-40% by 2020... You cannot ask the world to get off of oil from non-democracies when we, a democratic state, are still dependent upon oil and natural gas. So we have to set an example if we want the rest of the world to end their addiction to oil."

Arava Environmental Institute Director Tariq Abu Hamed had this to say, "The solar radiation can reach 1100 watts per square kilometer, this is a very high amount, and it's one of the best places in the world to have solar voltaic panels to generate green electricity."