Hebrew manuscripts in the British Library 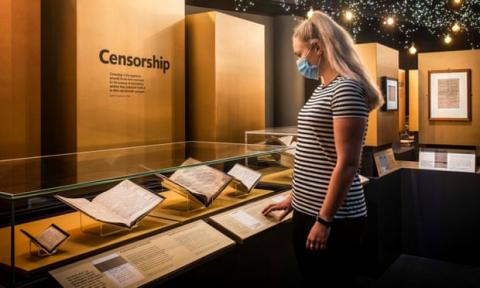 Like any good spell book it’s got all the important magical recipes; how to escape demons, obviously, as well as safe travel, catching thieves, successful love-making, and the more mundane problems of how to overcome fever, diarrhoea and swallowing a bone.

Now the small 16th-century spellbook containing 125 recipes is about to go on public display at the British Library as part of its delayed Hebrew Manuscripts exhibition. The library has a rich and wonderful collection of more than 3,000 Hebrew manuscripts and, before lockdown hit, completed a six-year project to digitise them.

“It was an extremely demanding and challenging initiative, but we are so proud to have accomplished it,” said the curator, Ilana Tahan. “We wanted to celebrate that by exhibiting a selection of manuscripts, some of which have never been on public display before.”

The plan was to open the show in March. It will open to members this week and to the general public on 1 September. About 40 manuscripts will go on display, dating as far back as the 10th century and spanning science, religion, law, music, philosophy, alchemy and Kabbalah. And magic, of which the spellbook is a good example. “It is a charming little manuscript with 125 magic recipes. It is so sweet and has some beautiful decorations.”

Among the spells is one “to increase love between bridegroom and bride”, which involves writing their names in honey on to two sage leaves and giving them each other to eat. “I dare anyone to try it,” said Tahan.

To catch a thief, simply write the names “Kematin kanit kukairi ve-hikani yazaf” on kosher parchment and hang from the neck of a black rooster. Circle around suspects and the rooster will jump on the head of the thief. To make yourself invisible, burn the skin of a snake in March and sprinkle the ashes in your eyes. People can use those same ashes if you meet a king – simply hold in your hand and they will heed your words.

And for a person who has swallowed a bone, the spell reads: “One who swallowed a bone, take a bone of the same kind and place it over his head without his knowledge, then whisper the following: nehash, nehash, har, har, mena’, mena’, tsa, tsa. And it is tested.”

Another highlight of the show will be documents shining light on Moses Maimonides, a 12th-century Jewish philosopher who was born in Cordoba, Spain, and went on to become the spiritual leader of the Jewish community in Egypt, where he was physician to the sultan, Saladin. He was the greatest Jewish polymath leader of the middle ages, his name known across Europe.

Thousands of Jews wrote to Maimonides asking for advice and legal rulings. The exhibition has a handwritten letter written by him in Arabic, but in Hebrew script, to a teacher who needed specific help. Tahan said the teacher taught two young girls in a remote Jewish community in Egypt. “For some reason, which is not quite clear from the documents – maybe somebody said something derogatory about him – he took an oath to stop teaching the two girls. In those times, when you took an oath, you stuck to it.”

But the teacher felt the girls were missing out on an education, so he evidently wrote to Maimonides asking how to go back on the oath. He replied that the teacher needed to get three Israelite witnesses to cancel the oath. “He was always pragmatic. He always thought of how he could help someone and not put them through a very complicated process.”

Also on display is the earliest dated (1380) copy of Maimonides’ Guide for the Perplexed, considered to be be his most significant philosophical work. The story of Maimonides also speaks to more harmonious times between Muslim and Jewish communities. “When Maimonides passed away, not only Jewish communities mourned him, but also all the Muslims in the city came to mourn him,” said Tahan. “He was known across Europe and across the three main faiths.”

Other highlights include a letter written to Henry VIII by an Italian rabbi in 1530 regarding biblical laws that could support the king’s claim to annul his marriage to Catherine of Aragon. The opening of the Hebrew Manuscripts exhibition is part of the next phase of the British Library’s gradual reopening after lockdown. Also reopening on 1 September is the Treasures gallery, which includes objects ranging from Leonardo da Vinci’s sketchbooks to Andrea Levy’s working drafts for Small Island and The Long Song.