Is the Bible's story of the Jewish exodus from Egypt accurate? 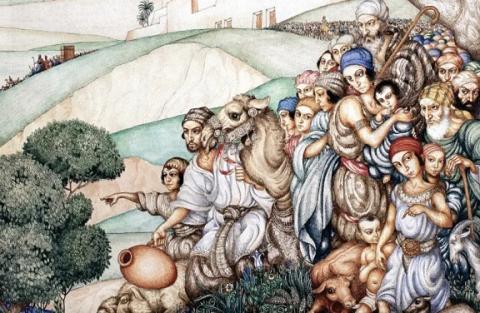 “I am the Lord your God Who brought you forth from the land of Egypt, from the house of bondage...” (Exodus 20:2).

This statement of Jewish history serves as the introduction to the Ten Commandments, widely regarded as the Bible’s consummate statement of God’s covenant with the Jewish people, and more broadly, with humanity. Yet this and the similar statement made at the end of the recitation of the Shema (Numbers 15:41) are understood by numerous archaeologists to be false. They argue that the story of the Exodus is part of an artificially constructed myth of origins taken on by early Israel as it came into being as part of a process of ethnogenesis.

This view posits that some Canaanites differentiated from their neighbors and moved to the central highlands, establishing a very different culture that we call ancient Israel. According to this view, they somehow decided to invent for themselves a claim that they were essentially escaped slaves of Mesopotamian ancestry who had fled from Egypt. Why they would have conceived this particular set of claims is never explained. Why would someone think that it was a badge of honor to have been enslaved? Of course, this view also denies the notion that the Israelites conquered the land from the Canaanites.

To understand how this view evolved, it needs to be understood that the archaeology of the Land of Israel, indeed that of most of the ancient Near East, developed primarily in the 19th century under the leadership of Protestant scholars who sought to use their investigations to prove the truth of the Bible’s record.

This gave rise to the subfield known as “Biblical archaeology,” of which the most famous formative practitioner was the American scholar William F. Albright (1891-1971). Albright’s parents had been missionaries, and he was imbued with the desire to prove the Bible. He played a very important role in the development of Israeli archaeology since the first generation of Israeli archaeologists were trained at his excavations.

Albright’s writings note over and over correspondences that he observed between the results of his research and the Bible. In many ways, his work was an attempt to prove the Bible true in its overall historical narrative. This approach was carried on to a great extent by Yigael Yadin (1917-1984), the central figure in Israeli archaeology for most of his life.

In the 1970s and ’80s, archaeology was reoriented towards a purely scientific enterprise that did not start with any assumptions but came to independent conclusions. Only after its conclusions were known would the historicity of the Bible – that is, the truth of its historical accounts – be considered.

Along with this trend came an associated desire to see the archaeology of Israel within the context of the Levant in general. While the academic value of this approach could not be disputed, it came with an unfortunate term, “Syro-Palestinian archaeology.” This term implied that the culture of Israel is in no way different from that of the surrounding cultures.

Two other developments were also key: there was a turn in archaeology at this time to the investigation of how people lived rather than who ruled them. At the same time, around the world, liberation theology was being proffered as a solution to oppression. This ideology argued that oppressed groups might essentially auto-emancipate and differentiate themselves from harsh ruling classes that control them, thus leading to new political, social and religious entities. It was from these developments that the notion that ancient Israel had come into being through such social processes was put forward.

But it is unfair not to consider here the context of this development in archaeological research itself. Albright had claimed that in the book of Joshua, the places that the Israelites defeated showed hard evidence of destruction in the 13th century BCE, the favored date for the Exodus. More recent archaeological investigations – and here Israel Finkelstein of Tel Aviv University has been in the lead – have found exactly the opposite, namely, no evidence of destruction at almost all these sites. Furthermore, as has been known for many years, there is no archaeological evidence for the Exodus nor reference to Israelite slavery in ancient Egyptian sources.

We should note here that the Merneptah Stele (ruled 1213-1203 BCE) does testify clearly to an era in which Israel is a people in Canaan, not yet settled in particular cities. Many scholars have taken this inscription as indicating clearly that there was a stage when Israel had entered the land, but not yet settled down in any specific locations. Further, those who deny the conquest have reported that numerous Canaanite towns show evidence of population changes in the 13th century BCE.

In any case, archaeologists who analyzed these facts in some cases reached the conclusion that there was absolutely no evidence for the Exodus, and that the absence of evidence for a large-scale conquest indicated that Israel had very different origins. They thus trace those origins to the process of self-differentiation and internal ethnic identification.

Here is the irony in all of this: those who were motivated to take the Bible out of their hands as they held the spade, that is, to do archaeological research as a purely scientific enterprise, did exactly what their predecessors had done, only in the reverse. They took that Bible in hand, and understanding it in a literal manner, concluded that its historical records, at least for the Exodus and conquest narrative, were not true.

But let’s take a look at these claims regarding the conquest.

The very important but now virtually ignored Israeli Bible scholar Yehezkel Kaufmann (1889-1963), in his commentaries on Joshua and Judges, brilliantly demonstrated that the Bible presents to us two very different, alternative pictures of the conquest.

Far from what most of us learned as children that the book of Judges happened after Joshua, Kaufmann shows that while Joshua was an account of an immediate, speedy onslaught and rapid conquest, including the almost complete destruction of the Canaanites and their culture, Judges told a very different story, namely, that of a gradual conquest.

The tribal groups of Israel and its various clans, through temporary alliances, were able to dislodge the Canaanites and take control of much of the central hill country. Furthermore, the picture outlined in the book of Judges was one of continued Canaanite presence, and indeed, religious influence. This picture fits with the descriptions in Samuel and Kings of the never-ending battle of the Prophets to woo the people away from Canaanite religious practices.

What archaeologists who claim to have disproven the Biblical account have actually found is evidence that demonstrates that the model of conquest, gradual infiltration and expanding control, put forward by Judges, is representative of the actual events of the 13th century BCE. Moreover, this is the very same period of the collapse of civilization in much of the ancient world that sent the Sea Peoples, most notably the Philistines, to the shores of ancient Canaan. It is hard to understand why a priori the Israelites cannot be seen as having entered the land from outside rather than developing through ethnogenesis. In fact, as the books of Chronicles testify, what we might call proto-Israelites were in the land even before the suggested date of the Exodus and conquest.

Much of this denial of the Biblical account starts from the absence of evidence for the Exodus in Egyptian records, despite extensive evidence for the presence in Egypt of large numbers of West Semites in the period before which the Exodus would have occurred. Even though a variety of details of the Biblical account could fit easily into the chronology and history of Egypt at this time, it is still the case that no direct evidence of the Exodus can be identified in Egyptian texts.

I should like to call attention to one exception to this that is usually either ignored or argued against. Josephus quotes the extremely significant Egyptian historian Manetho (early 3rd century BCE) who provides two accounts of the Exodus. Both of these accounts are extremely antisemitic, and Josephus quotes them in his polemic against antisemitism, Against Apion, to argue for the antiquity of the Jewish people. In the quoted passages, Manetho claims twice to have copied these Exodus accounts from ancient Egyptian holy books. It is easy to dismiss the reliability of Manetho, especially when his original work does not survive. But this is mistaken.

Manetho wrote before the Torah was translated into Greek, so he would have had absolutely no access to the Biblical account on which to base his narratives. Most importantly, Manetho is the ancient historian who provided us with the entire sequence of rulers of Egypt as well as the system of periodization by which we divide them. His very detailed accounts, when merged with those of the Babylonian priest Berossus (beginning of the 3rd century BCE) and those of Herodotus (circa 484-425 BCE), have provided the entire chronological framework for the history of the ancient world. No one doubts the evidence of Manetho about anything else, so why should we doubt that his accounts came from ancient Egyptian texts?

If this is true, we have evidence that the Exodus was, indeed, part of ancient Egyptian historical memory, and the two accounts mentioned by Josephus reek with the antagonism to Jews and Judaism that certainly might have emerged in the aftermath of Israel’s escape. Interestingly, these two accounts provide separate dates for the Exodus. One seeks to make the case that the Israelites should be associated with the Hyksos, West Semites who had taken over and ruled Egypt from circa 1650-1550 BCE until they were expelled by native Egyptian forces. But it seems that virtually all the historical evidence that we have points to dating the Exodus in the 13th century, and this is the dating given in Manetho’s second account. I certainly do not want to claim that these early Hellenistic period accounts, even if taken from earlier Egyptian texts, are historical proof of the Exodus. Rather, my point is that there was historical memory of the Exodus in Egypt and that memory was completely independent of Jewish texts or traditions.

Let me propose, therefore, a completely different approach to the weighing of historical and archaeological evidence. The job of historians is to reconstruct as closely as possible from all available evidence what was happening in ancient times. Archaeologists who, based on their data alone, seek to conclude that there was no Exodus and there was no conquest have fallen into the same trap of the earlier archaeologists: that of proving or disproving the Bible.

Rather, our job is to take archaeological evidence and textual evidence, from Jewish and non-Jewish sources, and to put forward as historians what we think most likely occurred. Such an approach yields a very different picture. By accepting that there may indeed be Egyptian traditions of the Exodus independent of those passed down in the Bible, and by realizing that archaeological evidence favors the picture of the conquest presented in Judges, the most likely (but not proven) conclusion is that there indeed was an Exodus followed by a gradual conquest.   ■